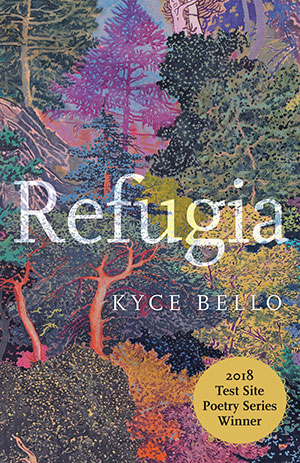 Recently, in Kingfisher County, Oklahoma, saltwater began inexplicably bubbling up from the ground at a rate of “two-to-four gallons a minute,” killing trees and crops, potentially tainting drinking water and whole ways of living. Unsurprisingly, the culprit is again our insatiable need for the earth’s most tightly held resources, this one a hydrocarbon gas mixture that can, through the great force of pressurized, toxic, brackish water, be released from the shale that holds it.

Kyce Bello doesn’t mention fracking in her award-winning first book of poetry, Refugia, but as “the mapmaker cries out when riverwater / and seawater become one water,” it is difficult not to read “all the gods in mourning” as portentous and capable of knowing far more than the language of the poem can hold. This deep and unspecified knowing seems to be a prevailing message in the book, but it leaves plenty of room for other significant refrains: apples and the temerity of belief; time and its ability to collapse and expand around us; loss as the most sincere reminder of our place in the natural world.

“For decades, / they’ve watched two degrees determine / by which means a tree will choose to die – / hunger or thirst. The delicate doorway / of each pine needle’s mouth hanging open, / or snapped closed.” There is enough intrigue in these lines from “Tree Coroners” to lead the reader down a wormhole into the anatomy of pine needles. But there is also a weighted, unspoken understanding. The poem doesn’t need to mention the Paris Climate Accord or the climate crisis to invoke the cataclysmic change of 2º Celsius that we—forever the excavators of earth’s deep body—are failing to forestall. It needs only remind us of the breathing and tenuous lives of trees.

There are lines in this book so self-contained that they could easily stand on their own as monostitches, their newness and surprising familiarity delivered in one short breath: “What isn’t a garden, or a seed slipping into earth?” Other lines offer a brief expedition in craft. The palindromic consonance of “a wolf disappears into a bison carcass, // caverned / by its feast,” exalts a moment of necessity into one of sonic stimulation and delight. And while I will never stop hearing “it’s been June all January,” as I walk through the unsettled and changing air of our seasons, it’s the poems that are too whole to imagine dissecting that truly exhibit the scale of Bello’s craft. Poems like “Dowsing” and “Origin of the Apple” are songs made meaningful through accumulation, each part functioning within a larger ecosystem of constant mutual impacts; no single sound a wind unaware of its dependence on the trees surrounding it.

Refugia captures the losses, the quiet rage, and the constant, near-overwhelming wonder of life on this very particular planet in this very particular moment, somehow also managing to make amends with the arriving of our almost certainly unfamiliar future. We’re left to continue marching forward, the ground as uncertain beneath our feet as over the roots of the piñon tree. “If it is certainty you’re looking for, / tend the water boiling in the cookpot. // Move it off the flame.”