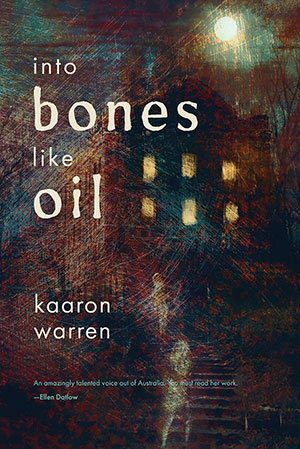 Kaaron Warren relives her fascination with ghosts and, like every great writer, steals her stories from the everyday. But nothing is everyday in where she takes you. Into Bones Like Oil is a nonimposing story that is a big haunting for the unsettling themes it explores.

In the gentle ticking of a clock, the silent roll of a sea, the narrative invites us into protagonist Dora’s solitude. The story discloses a mother’s guilt. We are trapped with Dora inside a shipwrecked house and its shipwrecked occupants, and all its visiting ghosts.

As in such (multi) award-winning works as Tide of Stone (2018) and The Grief Hole (2016), Warren lulls you with deceptively simple text into a complex oddity, where all characters are nearly appealing in their flaws. Like Trevor, who is handsome in an immature way; short and bouncy, he’s like a little Fluffy. Like ex-sailor Luke, easy on the eye, so full of secrets. Like big Larry, so strong, his handshake could break bone. Like Roy, with the skin disease, the landlord who lures specters, who takes advantage of sleepers—conduits to ghosts and their stories.

Warren enchants you with what she tells, what she doesn’t tell. There is an omnipresent suspense inside a vivid sense of place, a most gloomy place: “The bathroom was tiled, floor and walls, in pale purple with gold streaks. It gave the room an odd glow, because the light fitting was set high in the ceiling and dim due to dust and insects in the pale green glass globe. The toilet was old but clean.”

There are smells everywhere: wet hair, hot metal, musk. And sound: feet, cars, the tick tock of an unseen clock. The prose is quietly ruthless. A reveal about something dreadful, like an infant torn live from a hung woman’s belly, falls out of a normal conversation about something else. There is almost a monotony to the story, yet just as you relax there are shadows of people in the room.

Into Bones Like Oil is Kaaron Warren in her element. Her summons into a wine bar of sorts. For ghosts. Shipwrecked ones. And nothing is innocent. Not even you.