Lost in the Spanish Quarter by Heddi Goodrich 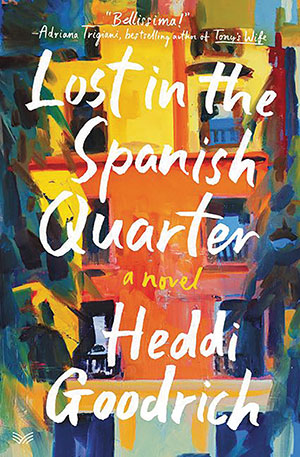 Sometimes a novel stands out less for its content and more for its very existence. Such a novel is Lost in the Spanish Quarter, by Heddi Goodrich, which distinguishes itself from other recently translated works—and other books set in Italy—for several notable reasons. For starters, the author and the translator are the same person. Goodrich originally wrote the novel in Italian and then translated it herself. What’s more, the book, which revisits a failed love affair between university students, is set in Naples, a fascinating Italian city that is less known to foreigners. Lastly, it was published by a new imprint of Harper called HarperVia, aimed at spotlighting “international voices.”

The book is Goodrich’s debut novel. The author moved to Naples while she was in high school and remained there for university, graduating from L’Università degli Studi di Napoli “L’Orientale” with a master’s degree in languages. Her biography positions her well to bring a new perspective to the literary sphere since far fewer books in the English-speaking world have been written about or set in Naples. As she writes in the novel, “Naples was never a choice. It was a gift that had to be forced on you, by birth or by fate.”

The work tells the story of Heddi, an American student in Naples (like the author), and her group of Italian friends, including Pietro, from rural southern Italy, who quickly becomes her lover. The novel delivers in breathless fashion their whirlwind love story as it plays out in the exotic locale of Naples’s Spanish Quarter. Indeed, it reads like other college novels—lots of drinking and overthinking plus grousing about professors and classes. The setting, however, allows Goodrich to evoke class tensions and regional differences against the backdrop of the idiosyncratic Italian university system.

Goodrich also taps into the rich epistolary tradition, and the parts of the book dedicated to Heddi’s and Pietro’s letters are the most enjoyable. The exchanges take place years after the relationship has wound down, and the narrative pivots between scenes of the love affair and the letters.

Arguably, some of what distinguishes the book also hampers it as a novel for the English-speaking market. When Goodrich originally wrote the work in Italian, she could avail herself of a language full of impossibly long sentences whose clauses have clauses. That type of meandering prose doesn’t always translate well into English. There is also some overwriting, where three descriptions of something are provided when surely two (or one!) would suffice. To wit, when the two lovers first kiss, proverbial fireworks break out: “I lost my grasp of time, or perhaps time had lost its linearity. When had we started kissing: two minutes ago, two hours ago? I didn’t have the faintest idea. The beginning had slipped into oblivion and the only certainty was that we couldn’t stop.” When they disengage, Goodrich writes, “We looked at each other for an eternity, or maybe just a breath.” One or the other. A few pages later, she writes, “Maybe I’d had too much to drink, though my full glass was proof to the contrary.” Was the part about the proof necessary?

Nonetheless, the epistolary portions of the book really stand out—such that one wonders what could have been had the book been largely an epistolary novel. As you read the letters, the plight of Heddi and Pietro cannot fail to resonate, if for no other reason than doomed love affairs are a hallmark of human life. Plus, the natural tension in such situations is nicely amplified by the cultural conflict between Heddi the American and Pietro the Italian.

HarperVia’s selection of this text could bode well for efforts to increase the number of Italian books reaching American bookstores. Moreover, books written in Italian by women that are translated into English continue to lag books written by Italian men. It is promising that HarperVia chose this book by a woman author as its first envoy into the publishing world.