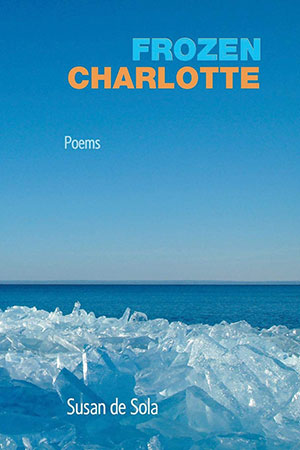 It would be easy—too easy—to steal from Richard Wilbur and say Susan de Sola’s poetry is “call[ed] to the things of this world.” Too easy because, as richly endowed with the world’s physical and visual bounty as de Sola’s poetry is, her debut collection, Frozen Charlotte, offers much more: a sense of history (especially as embodied in her eastern European Jewish forebears), of place (de Sola’s situation in Europe—she’s lived for many years in Amsterdam—is evidenced in the book’s cosmopolitan breadth of vision), penetrating portraits of people (and other forms of life), complexly loving evocations of her husband and children . . . all delivered with eloquence, musicality, a mastery of meter and rhyme (though free verse figures as well), and many touches of well-wielded humor.

A number of de Sola’s strengths are especially evident in a blank-verse reminiscence of a not-quite-lover from her youth nicknamed Buddy. The poem’s eponymous subject, whom de Sola meets during summer stays at her grandmother’s beachside place, is a bit of a blue-collar misfit in de Sola’s “posher” world. After a dope-fumed youth, he becomes a respectable fire department captain—only to die of an overdose of pills and alcohol in his late thirties. The poem ends with a moving valediction: “Chivalric Buddy, unafraid of fire, / yet quenched in liquor, his exit sudden, unplanned. / I recall his kindness, tilted nose, the mystery / that was his face (like many bearded men), / his soft blue eyes, the big and solid frame. / I wonder now, what was his name—his real name? / I wish that I had asked him. I would ask / him now: Buddy, tell me, what’s your name?”

If I had to lodge a reservation about de Sola’s poetry, I’d say that it might be too rich with things, but that reservation may reflect nothing more than this reader’s difficulty in taking in such plenty (and/or this poet’s envy of de Sola’s ability to offer it). Better to say that de Sola’s is a “large” poetry in the best sense. It’s also distinctive. When you’re reading Frozen Charlotte, you’re spending time with a unique sensibility, both personal and poetic. Even as de Sola keeps faith with many aspects of poetry’s great tradition, she’s also, in an unshowy way, an original.