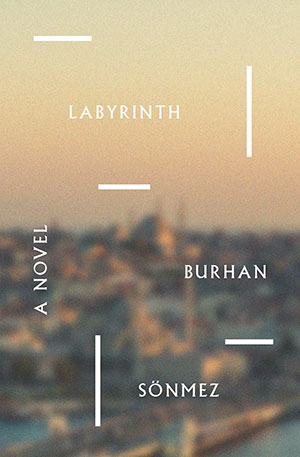 Compact, thought-provoking, and gently exquisite, Labyrinth, the fourth novel by Turkish author Burhan Sönmez, quietly establishes him as one of Europe’s great contemporary authors. From page one, we are drawn into the immediacy of the main character, Boratin, a youngish jazz musician who has lost his memory following a suicidal leap into Istanbul’s Bosphorus strait. Moved home from the hospital, we follow his studied reimmersion with once-familiar objects and with the family, friends, and social mores that have formed the trappings of his life until then.

Largely shut out from this previously ingrained reality, Boratin progresses through clouds of impressions, reflection, reasoning, and evaluation, seizing each new-old thing he meets—propelling the narrative with an etched clarity that sends out sparks at every turn. The effect of the book’s simple clauses, infused with a continual stream of sensual description, is hypnotic. Sönmez has a knack for finding just the right offhand detail to throw a scene or stream of thought into perfect philosophical relief—akin perhaps to Don DeLillo’s prose, yet tempered here with a sort of European humility. In place of DeLillo’s hard irony, a brilliantly earned sensuality restores a sense of narrative wholeness in how we experience this novel’s unfolding:

They had heard that in the beginning was the Word, now they can hear from the book dealer’s voice that in the end too there will only be the Word. Life is comprehending the word. And when the book dealer’s slow-moving lips eventually say that death too consists of words, the young pair raise their heads and gape at him. If a book states that on the very first page, who knows what promises all the other pages might contain.

Boratin’s injury has also smashed certain elements of time from his walls of knowing—biblical and historical knowledge exist in him now without the certainty that they are relegated to the distant past. Handled lightly by the author, this additional layer adds a great understated power to the narrative—it manages to evoke much more than it says.

To write this tale, Sönmez undertook considerable research into medical accounts of amnesia and related conditions. The arresting particulars of observation that suffuse this novel stem partly from Sönmez’s own experience recovering from brain trauma in early adulthood. (For an in-depth audio conversation with the author about his writing of Labyrinth, please visit Trafika Europe’s “Burhan Sönmez Interview”). Parenthetically, the thin Bosphorus strait divides the European and Asian hemispheres of Istanbul like a corpus callosum. One might observe that Boratin has plunged through this narrow strait into his newly awkward state of unknowing and relearning, of foreignness in the everyday, much as Turkey herself has plunged into a new phase of identity, displacing many from their lives, in a society they once knew. It is a tribute to how smartly Sönmez has woven this narrative that the text withstands such structural parallels.

Boratin’s route back to a whole identity comes in the small discoveries he makes along the way: that others also sometimes feel mortal fear, displacement, and compassionate yearning and that they respect and love him for his art of music. Slowly, the narrative voice itself shifts more to first person, as this imperfect character integrates back into his community of all-too-human friends and comes to feel he belongs.

Over it all stands Boratin’s vulnerability and his insistent progress nonetheless, through his own private terrain, at once brand new and yet eternal.

The night, that squeezes into the net curtain in the bedroom, vibrates slowly when the medicines prove ineffective, turning into a bottomless, restless, pitch-covered pit of torment. This night isn’t clear like other nights. If Boratin surrenders to the thought he has been striving to banish for hours and takes a few more sleeping pills and pain killers, he will be embarking on another suicide. But it’s better to live and find out what it is that can induce someone to turn their back on life, and then commit suicide again, if need be.

Thus is great art made.