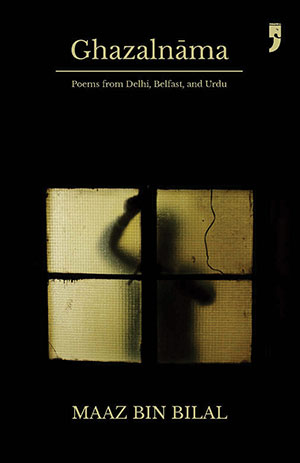 The ghazal, a form of Urdu poetry with a certain meter and rhyme, made its excursion into English with the forays of modern poets. Trailblazing Indian American poet Agha Shahid Ali is conspicuously credited for serving anglophone readers with his English translations of Urdu ghazals and his own efforts at crafting ghazals. Similarly, Maaz Bin Bilal, a young bard from Ghalib’s land, Delhi, influenced by Agha Shahid, quite successfully busies his hands with ghazals in his recent collection, Ghazalnama. Maaz connects the personal with the universal through his feats of imagination and syntactical prowess.

Ghazalnama is a sequence of poems encompassing the poet’s journey from Delhi to Belfast and his return to Delhi again, as suggested by the book’s subtitle. Divided into four parts—“Delhi,” “Belfast,” “Urdu,” and “Delhi Again”—the eclectic volume opens with poems about Delhi, a city with which the poet is besotted, and presents a terse appraisal of the cultural life of the city. For instance, the poem “Restless” is a unique fusion of a shunned lover’s feelings and a topographical miniature of the city: “you come not and I keep biding my time / The peacock’s wings are furled, surely, restless / Together raging storms, powerless / Delhi too, romantic, rainy, restless.” Delhi, the recurrent leitmotif in various poems, is observed in various aspects, unraveling the murky chambers of the city’s life precipitated by the choking pollution.

The vitality of this collection lies in the rich tapestry of its variegated themes; the poems from “Belfast” meditate on loss, friendship, childhood memories, love, empathy, and wry humor. These scissor-sharp couplets offer a viewpoint marked by insightful propositions as couched in “Another Art”: “Loss of originality is a crisis / in the very use of language that loss / lives. Living is losing, a day, a moment, at a time.” The next section, “Urdu,” consisting of translations of famous Urdu poems, is a testimonial to the ardor of the poet’s translation efforts; he imitates the inflections and rhymes of Urdu ghazals in his English renditions, although sometimes losing the weight of the original, which is, perhaps, unavoidable in translation.

Bilal must be applauded, however, for the apparent effortlessness of his writing suffused with poetic tenderness. The relaxed beauty of image-driven expressions, fertile ambiguity, an opulence of fluid language, and the intricate and entangled complexity of ghazals are the telling features of his poetry.