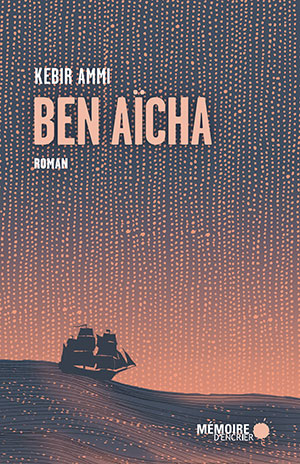 The age of Louis XIV conjures images of pomp and splendor, court intrigues and trickeries, loose morals and scabrous adventures, ribaldry and chivalry. In this lawless world, feelings are sacrificed to greed, ambition, or duty. In this exclusive, elitist normalcy, where everyone and everything is an extreme version of itself, life becomes a perilous adventure. Sudden escalations to and plunges from power highlight the caprices of destiny, leaving the characters resigned to their dispossession. Add Barbary pirates, diplomatic negotiations, and hopeless romance, and you have a spiced-up cloak-and-dagger novel. Such is the setting of Kébir Ammi’s latest and ninth novel, Ben Aïcha. In it, he returns to historical fiction to sketch the life of a Moroccan admiral and ambassador sent to France in 1699 to negotiate an agreement about reciprocal prisoner releases.

Negotiations become complicated when Ben Aïcha meets the king’s daughter, Marie-Anne de Bourbon, Princess of Conti. Their subsequent clandestine, short-lived love affair goes through the traditional extremes of passion and despair when the weight of royal power crushes the lovers’ dream of freedom. In the background of this tale of rebellion against societal norms, Ammi examines class relations and Christian-Muslim encounters. The bookish Orientalist knowledge of French scholars is echoed by popular cultural prejudice against Mahometans in seventeenth-century France. Ben Aïcha’s observations of France reveal a less than flattering scene. The Muslim world is not ideal either, being wracked by cruelty, poverty, and isolation. Ammi’s modern style and expressions (with the exception of old-fashioned formulas of politeness) bring this dialogue between civilizations into the reader’s world.

The novel is told by a narrator who is Ben Aïcha’s protagonist and childhood friend. In the book’s first two chapters, this narrator calls Ben Aïcha’s rise to the height of power, and in the epilogue he summarizes the admiral’s fate after his return to Salé-le-Vieux, which used to be a pirates’ haven. The brevity of this narrative intervention elegantly frames the novel in the oral tradition; it also mirrors the portraits of the Princess of Conti by Jacques Paris that barely highlight her eyes and lips, leaving everything else to the imagination. Similarly, the story focuses on the lovers’ passion, evoking in a few sentences the entire life of a once-famous man now defeated, tormented, unrecognizable to his close friends, and a stranger to himself.