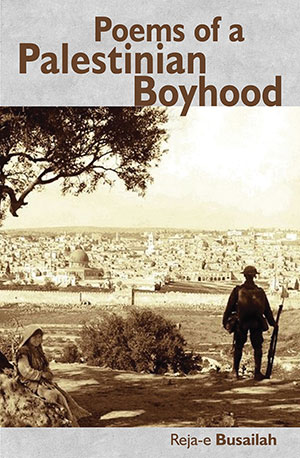 Reja-e Busailah’s Poems of a Palestinian Boyhood is an extraordinary collection that presents details of a boyhood despite this boy’s loss of sight at an early age. He takes the reader on a journey in time and space, into the special world of his memories that still evoke fervent longing for his roots. Busailah’s journey unites him with his family, village, and with the apple, pear, cherry, orange, and grapefruit trees of his childhood, which represent inseparable constituents of his contemporary persona. He assimilates himself with the fruit and the landscape, expressing vivid memories of the simple yet passionate child that he was, saying, “I was peeling an orange to eat / on the Ides of March / it bore the bright gold of a steep sunset.” His thorough, luminous recollection of the aroma of thyme, lemon, and cardamom represents an unmistakable depiction of a nostalgic memory.

Busailah resurrects the forgotten Palestinian village and gives voice to the people who thrived and carried on a simple, ordinary life. Before the British occupation of Palestine, his village existed safely and happily. It was the rooster that “had a sense of curious habit which spread / a sense of security and reassurance / all over the neighborhood and beyond.” He unapologetically condemns the occupation that ruined his boyhood as well as the lives of his people. It is the “Beasts of the West [who] bit them with unusual rage / and drove them yet deeper into their apartness / beasts of dogma / beasts of greed / beasts of race at its beastliest.” Writing nearly eighty-five years after the 1936 revolution, the Palestinian resistance resonates in Busailah’s poetry. He envisions the hopeful future of Palestine because of the younger generation. It will follow on the footsteps of their parents as mothers continue to give birth to “the new life / with the blood of the olive / and the flesh of wheat.” Busailah is that new life which immortalizes Palestine through memory and poetry.

Busailah’s mastery of language resonates on every page of his collection. His vibrant portrayals such as the children’s “eyeballs looking like cherries” and “the wave curl / like passion furling up in the falling cool” portray a creative, poetic imagination. He utilizes his exuberant knowledge of Palestine’s history and paints brilliant, lively images that make his memories glitter despite some dark moments. His poems are a bridge that leads to the arena of his boyhood, bringing the village to life in his verses, where we meet his father, mother, and others like his aunt, whose “voice is the sum total / of seven modern decades / her voice skirts the straight deaf course / and zigzags down to her niece / for a new set of decades.”

Busailah’s loyalty to the people and longing toward the land are intertwined with his powerful sentiments toward the idyllic life of the Palestinian village. The trees and the wheat ears will always be a testimony to a boyhood and a life that once flourished in peace.