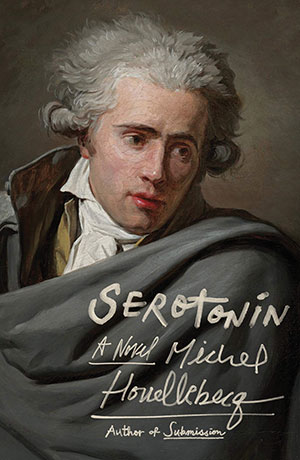 Literary criticism nowadays tends to walk the line between aesthetic and political judgment, but when it comes to the novels of Michel Houellebecq, the discussion has always fallen firmly around the latter. Houellebecq’s sustained rejection of Western liberal “progressivism” makes him something of an anomaly in the literary scene, while his prophetic engagements with current events—his novel Submission, for example, which imagines the Islamization of France, was published on the day of the Charlie Hebdo attacks—have done far more to throw him into the blazing headlights of the media than his forays into the soul and psyche of modern man.

His latest novel, Serotonin, fulfils the usual criteria. Houellebecq presents us with a philosophical spin on the atomization of European society and of the vise grip of a bureaucracy whose “whole point” is “to reduce the possibilities of your life to the greatest possible degree when it doesn’t simply succeed in destroying them.” The forfeiture of individual liberties informs the subplot of the novel, which chronicles the decline of French agriculture under the pressures of free trade and seemed to anticipate the resistance of the gilets jaunes movement. But, as is often the case with Houellebecq, these sociopolitical grievances serve chiefly as a counterpoint to the personal decline of Serotonin’s ailing narrator, Florent-Claude Labrouste.

The plot follows the life of Labrouste in the run-up to, and aftermath of, his early retirement from the Ministry of Agriculture. Through a Sebaldian blend of memoir and travelogue, Labrouste recounts his memories of ex-lovers and old friends while traveling across Paris and Normandy in a futile, desperate attempt to renew those lapsed relationships. Like Labrouste, however, each of these characters is only a shadow of their former self. There is Claire, an aspiring actress of great beauty, now defeated by alcoholism and obesity; Aymeric, a failing farmer and descendant of the ancient d’Harcourt family who has lost his wife to a world-renowned pianist and is faced with the necessity of selling off his family estate; and Camille, Labrouste’s former assistant-cum-girlfriend, now a single mother with no friends left in the world. It is in her condition most of all that Labrouste sees a reflection of his own, in which the inevitability of human decline hits home with terrible force.

What afflicts Serotonin’s characters is a sense of profound emptiness. Labrouste defines his existence in purely negative terms: “a middle-aged Western man, sheltered from need for several years, with no relatives or friends, stripped of personal plans and of genuine interests . . . essentially deprived of reasons to live and of reasons to die.” His solution, similarly negative in emphasis, is to embark upon a prescription of the new drug Captorix, an antidepressant which dramatically increases the amount of serotonin in the blood, and which, like nicotine, “brings no joy, defined [instead] entirely by a lack.” One of its symptoms is to cause a loss of libido, but we might discern that it is responsible for his lack of activity altogether. The novel is peppered with moments of harrowing bathos as Labrouste fails to make the crucial decisions that might take his life, and the story, in a more dramatic direction—outing a pedophile, for instance, or pulling the trigger of a gun.

Labrouste’s language is equally unsure of itself. Frequent paragraph breaks emphasize the vacuum into which his life has fallen, while on other pages we encounter long, meandering sentences that lose all sense of grammar and direction. This anaesthetized style can make, at times, for difficult reading, but it is the sacrifice Houellebecq makes to portray the suffocation of culture under the burdens of science and bureaucracy. Technical jargon rubs shoulders with the proper nouns of consumerism in the novel’s own brand of postmodern patois, passing from Diet Coke and Samsonite suitcases to “glioblastomas and anaplastic astrocytomas” with nonchalant dexterity. The translation retains this tension, while preserving certain phrases from the French—hôtels de charme, soup gratinée—to give a kitschy polish to Houellebecq’s plastic language.

When the occasional lament does burst through the surface, its effect is powerful. “Must I really give my life for these wretches?” asks Labrouste, finally contemplating the unthinkable. But it is a question that runs in the bloodstream of Serotonin itself, from its first page to its last breath, as the novel martyrs language, plot, and chronology in its effort to lay bare the human condition, in all its filth and misery.

As audacious as it is effective, this may be Houellebecq’s most impressive work yet.