The Quarter by Naguib Mahfouz 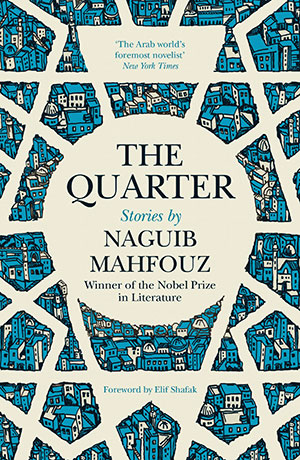 When Egyptian critic and noted journalist Mohamed Shoair uncovered a collection of never-before-seen stories by Nobel laureate Naguib Mahfouz, he labeled the discovery a “literary treasure trove.” And while history has shown that manuscripts discovered after a writer’s death should be treated with a healthy amount of skepticism, The Quarter appears to be an exceptional case.

Shoair uncovered the texts during a visit to Mahfouz’s family home. The writer’s daughter, Umm Kulthum, pulled out a small cardboard box that contained novel drafts and outlines, notebooks filled with political observations, contracts, and a collection of forty stories with a note that read, “Published stories written in 1993–94.” After carefully reading through the stories, however, Shoair realized that eighteen of them had not been published before and encouraged Mahfouz’s daughter to bring the stories to light.

Though it is not clear why the eighteen stories were not published along with the other twenty-two, it is possible that they were forgotten during a turbulent period in Mahfouz’s life. In 1994 the then-eighty-two-year-old novelist was stabbed in the neck by an extremist outside his Cairo home. While he survived the attack, he was permanently affected by nerve damage to his right arm.

Now, twenty-five years following the assassination attempt, the collection of eighteen short stories has finally seen the light of day under the title The Quarter.

Those expecting the profound realism of The Cairo Trilogy or the richly descriptive world of Midaq Alley will undoubtedly be surprised by the stories embedded in this charming book. The Quarter is a collection of interconnected, Sufi-inspired fiction—a fantastic example of the experimentalism that characterized the twilight portion of Mahfouz’s career. Instead of focusing on historical context or detailed descriptions, Mahfouz plunges his readers into a simple world gleaming with folktales, moral allegories, and strange, otherworldly occurrences.

Translated by renowned scholar Roger Allen, the book begins with “The Oven,” a quick read that perfectly encapsulates the very essence of the slim collection of stories—a tale of love, scandal, and family honor in a small alley brimming with life. The third story, “Pursuit,” follows an abandoned single mother as she confronts the father of her child in the very same alley. This continues until the head of the quarter becomes involved. The resolution to the story may surprise you on first reading.

On the other hand, “The Storm” is a text steeped in the fantastical. An ominous line opens the story—“It all happened when the sun was high in the sky”—before describing a storm that descended on the alley and its residents. It is like nothing the quarter has seen before, and by the time it blows over, many of the residents have been robbed of their belongings. Despair settles over the alley and its recurring characters as they await the start of a new day.

Beyond the eighteen texts included in The Quarter, publisher Saqi Books also included scanned versions of the original Arabic texts as well as Mahfouz’s Nobel Prize acceptance speech from 1988. While the former was placed in the book to alleviate doubts as to the authenticity of the work, the latter was included as a reminder of Mahfouz’s character—the “son of two civilizations,” the Pharaonic civilization and the Islamic one. It is through this modest and deeply empathetic speech that readers gain further understanding of the man now considered the godfather of the modern Arabic novel.

While The Quarter does not contain the sophisticated characters or detailed landscapes that characterize Mahfouz’s realist phase in the 1940s and 1950s, and certainly does not represent the best of the Nobel laureate’s creative talents, it still contains glimpses of the master’s genius. Despite the range of ideas presented in the collection, the stories remain interconnected, weaving a thematic web of ideas that start to resemble the narrow roads within the alleyways of the quarter itself. In this world where many characters are unnamed, where time is displaced, and where logic plays second fiddle to the absurd, it is the quarter that emerges to take center stage as the story’s protagonist.

The Quarter is a worthy tribute to the experimentalism that Mahfouz undertook in Arabic literature and a recommended read for those who want to understand how the Arab world’s most celebrated novelist earned the title “The Master.” Be warned, however: this is not a book for those committed to Western genre conventions or for those who believe that the rules of traditional English-language literature are not to be broken. This is a book that insists that our modes of writing are endless, even if the scope of the stories is limited—one final reminder that in order to fully appreciate Mahfouz, you must free yourself from the shackles of traditional Western writing.

Karim Zidan is an Egyptian-Canadian journalist, creative writer, and translator with bylines in the Guardian, Foreign Policy, and VOX Media, among others.