Beneath the Tamarind Tree: A Story of Courage, Family, and the Lost Schoolgirls of Boko Haram by Isha Sesay 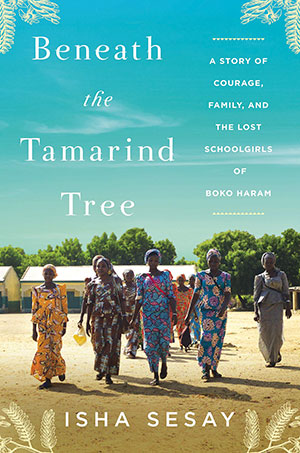 Isha Sesay’s Beneath the Tamarind Tree is a grave-toned paean to the fortitude of the roughly 276 Nigerian schoolgirls from Chibok who were abducted from their boarding school on the night of April 14, 2014, by the Boko Haram, one of the world’s deadliest Jihadist terrorist groups. The girls were subsequently held in captivity before a handful were released in 2016 in exchange for Boko Haram prisoners.

To date, about 112 girls are still missing, and, as Sesay laments, the world has all but forgotten them. Yet, as she reminds us, in the immediate aftermath of the kidnapping, they briefly captured global attention. Under the banner of the hashtag movement #BringBackOurGirls, celebrities like Michelle Obama and Beyoncé, among others, protested the abduction and demanded that the girls be released.

Sesay, a former CNN anchor and seasoned reporter on African affairs, covered the incident from its inception; the book is an attempt to resurrect public interest in the Chibok girls, not only because they continue to be in captivity but because Sesay also identifies deeply with the girls themselves. Although there is stark asymmetry between the privileged and largely urban upbringing of the Cambridge University–educated Sesay and the Chibok girls, raised in “homes without distinction” in the impoverished northern Nigerian town of Chibok, Sesay intuits a kinship predicated on gender, race, and geography. The Chibok girls, Sesay contends, are “heroic” by virtue of aspiring for higher education in order to break the mold of patriarchy and poverty. Sesay’s feminist mother, Kadi Sesay, had overcome similar obstacles in her native Sierra Leone. In the Chibok girls, Sesay sees a mirror image of her mother. Thus “saving” them by giving their story a strong media visibility becomes an imperative.

Indeed, the most riveting parts of the book are where Sesay describes the girls’ pre-abduction lives. She focuses on their unique identities and struggles as daughters and as conduits of their parents’ dreams of a better life. If the Chibok girls come to life as strivers, they are also vividly characterized as valorous, resisting their abductors’ pressure to convert and submit to the rule of Sharia. Huddling under the gigantic tamarind tree, a place to which they are initially confined, the girls resist through prayers, unity, and refusal. Sesay reconstructs the two-year-long harrowing ordeal from interviews with a few of the survivors. From the narrative of the ordeal it can be inferred that the girls are not merely victims of misogyny but of terrorism, like the Yazidi women of Iraq who were systematically raped and held as sex slaves by ISIS.

Sesay’s accounting elides the difficult truths of what the Chibok girls may have endured, but she mentions the brutal fact of rape used as a weapon against women in wars that men fight. The book offers very little about the spread of Jihadist terror networks across Africa or about the Boko Haram per se; the geopolitics of terrorism whittles down to dangers emanating from the globe’s “ungoverned spaces.” Sesay blames the US for leaving “spaces” like Chibok unmonitored, perhaps forgetting that the rise of entities like Boko Haram is triggered by such monitoring.

Terrorism is not foregrounded in Beneath the Tamarind Tree, however, a book that is a tribute to the resilience of sisterhood.