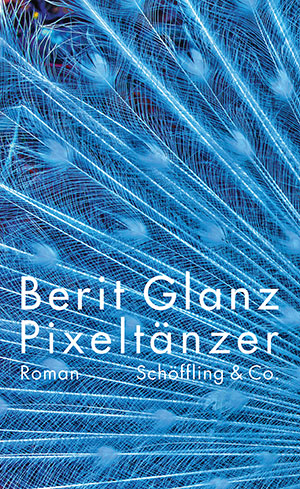 Berit Glanz is one of Germany’s brightest young stars. In a year where young novelists are dominating prize lists, including the German Book Award shortlist, Glanz’s excellent debut novel, Pixeltänzer, stands out. Glanz has won some early awards for her writing, but her main gig is as a scholar and translator of Scandinavian literature. Her debut novel does not touch on her scholarly concerns, but it feels nevertheless acute and well observed. The title, combining “pixels” and “dancer,” points to the mixture that dominates the novel, a tale of two lives: of a fictional protagonist, Elizabeth (nommée Beta), and of a historical artist and dancer named Lavinia Schulz. Lavinia Schulz lived in the Weimar Republic and was an innovative artist, combining dance with a creation of large, heavy masks. Her masks were recently discovered in the attic of the Museum für Kunst und Gewerbe Hamburg.

It is a novel of two halves. One is a story set in the present tense about a woman in an IT start-up environment. Eventually, she enters a coding competition (a so-called hackathon) and together with friends decides to come up with and present the most unmarketable app possible. Throughout this part of the novel, Glanz writes with confidence, clarity, and occasionally even brilliance about the world of coding in a way that is most unusual in contemporary literature—it fits so neatly into the narrative and the narrator’s other remarks and observations that the closest comparison for Glanz’s skill in integrating and evoking the creative art of coding in fiction is Neal Stephenson’s work.

Interlaced with the narrative of coding and start-ups is the story of Lavinia Schulz. Glanz’s method evokes predecessors like A. S. Byatt’s Possession or Ahdaf Soueif’s The Map of Love—stories of female protagonists who discover buried stories of women in history. The function of this specific use of archive and intertemporal discourse usually functions to create and maintain a female historical through line, a phenomenon that has often been interrupted by masculine historiography—a connection to female past selves: this, this was us too. Even male writers, like Tom Stoppard in his Arcadia, use such an effect for this purpose. There is something discovered in the past that sheds light on the present.

Glanz changes an essential factor. Glanz’s protagonist doesn’t do any real archival work, and so it resonates a bit differently that Glanz’s protagonist Beta leans on different kinds of museums for her knowledge. The mechanism here is one of dialogue—Beta engages in an online conversation with a mystery man, who leads her down a path of discovering Lavinia Schulz. They exchange pieces of information, rushing toward the murder-suicide that ended Lavinia Schulz’s life in 1924.

What Glanz adds to the usual narratives of archival discovery is a sense of openness, of a conversation. This collaborative sense of reading history is reflected in the collaborative process of the hackathon, where each member of the team contributes something essential—and, ultimately, in the collaborative nature of the art of Lavinia Schulz, whose full-body masks left the dancers inside blind, wholly reliant on the ensemble to create the performances.

Glanz also implies a question, posed to society at large, about accommodating women, women in art and creative people generally, but it is in this area that she holds back a little, regrettably. Lavinia Schulz and her husband, Walter Holt, were ensconced in the expressionist movement of 1920s Weimar Germany, with artists like Emil Nolde in their immediate orbit. And like Nolde, Schulz and Holt had an attraction to Nordic myths, which had more than a whiff of what would soon become fascism. Pixeltänzer comes out at a time when we have begun to reevaluate the fascist sympathies of Emil Nolde in particular, which were largely suppressed after the end of World War II. Glanz does not really comment on how some conceptions of art and society—and of the artist in society (echoes of Hamsun’s early work apply here as well)—may have political implications and echoes and how these politics may echo further in our own torn time, with right-wing thought ascending all over the world.