From the Shadows by Juan José Millás 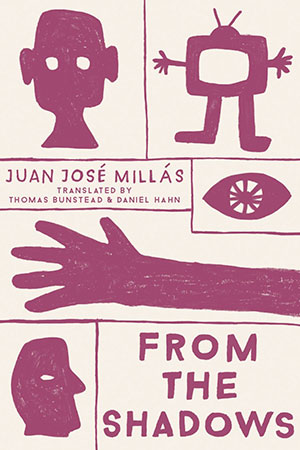 The invisible butler did it. That’s the high-concept vision of Spanish novelist Juan José Millás’s quirky, dark comedy From the Shadows. The winner of several of Spain’s literary prizes, this is his first book to be published in North America in English.

When forty-three-year-old Damian Lobo loses his job as a multitasker in high tech—a job he’s had since he was eighteen—he chalks it up to the “heartlessness of today’s capitalism.” He aimlessly wanders a mall in Madrid until he comes upon an antiques market. There, after he shoplifts a gold tie clip, he is pursued by security and eventually hides out in a one-hundred-year-old wardrobe that becomes his shelter and his home for the remainder of the book. The womblike nature of the vintage piece of furniture allows him to create a new self, a newborn personality.

He identifies as a moray eel, “lying in wait for some prey, or protecting himself from a predator of its own.” His prey and his predator are a “normal family” of bourgeois suburbanites on the outskirts of the city. Federico, the manager of an electronic toy store; his wife, Lucia, who works for a bakery known for its artisanal breads and pastries; and their teenage daughter, Maria, enjoy the luxuries of their three-bedroom bungalow. When Lucia unknowingly brings Damian into their routine life, he becomes the tenant of the wardrobe and their unseen butler.

Lucia buys the clothes cupboard after she recognizes it as one that once belonged to her grandparents. She and her twin brother, Jorges, would hide and play inside it. There are height marks scratched into it. After Jorges dies at an early age, Lucia no longer enjoys the dark insides of the massive closet. When she purchases it and brings it home, she finds it is too large for the bedroom and ends up placing it in front of an already built-in wall unit. Damian creates a cavelike environment for himself between the two pieces. He surreptitiously becomes part of the family’s daily life, embedded in the household as a “kindly poltergeist willingly keeping house.”

When they are out, he takes on all the necessary tasks to maintain order. He makes the beds, washes the dishes, cooks supper, irons, vacuums, dusts, repairs broken appliances. The family is oblivious to all this, until Lucia begins to suspect something is awry. She has an interest in the paranormal and believes there may be a specter in the house. When a Ghost Butler logs in on an internet forum, Lucia is certain it is her spirit of the wardrobe.

Throughout the novel, Damien continues to invent his new individuality. Part of that includes ongoing imaginary monologues with a nonexistent tabloid TV interviewer, Sergio O’Kane. His exchanges with O’Kane—and then another more elitist journalist, Inako Gabilondo—provide background to his childhood and the formative sexual fixations he had on his adopted Chinese sister. They also convince him that he suffers from depersonalization, a dissociative personality disorder that may derive from social exclusion and alienation as a result of the economic system.

When Damien discovers Federico’s secret life—more egregious than his own closeted identity—he plots to seek vengeance for Lucia. The bizarre conclusion to the novel is completely unexpected yet totally logical. Millás makes the incredulous believable.

A seductive narrator, brisk dialogue, and a unique claustrophobic setting contribute to a distinctive blend of Kafka’s surrealism and Pirandello’s absurdism. From the Shadows underscores the fact that the world is “a funny odd place.” The slim novel is a quick, riveting read.