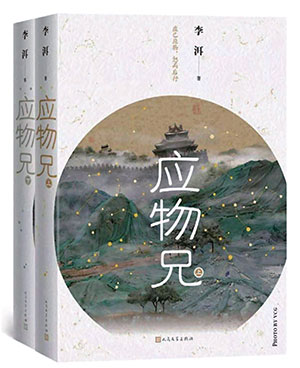 Ying Wu Xiong (Brother Yingwu), Li Er’s latest novel, won the 2019 Mao Dun Literature Prize in China. In the afterword, Li said he started this novel in the spring of 2005. It went well at first, and he planned to finish it before the Beijing Summer Olympics in 2008. But thirteen years passed before the publication of this novel of over one thousand pages.

Ying Wu Xiong consists of 101 sections, each marked with a number and a subtitle. It’s a parody of ancient Chinese historical biography. The subtitles of these biographies are always the first phrases—that is, the names of famous people in Chinese history. The first section of Ying Wu Xiong is entitled “Brother Yingwu,” who is a professor at Jizhou University studying Confucianism and the protagonist of this eponymous novel. But too often, instead of people’s names, the subtitles might be a nickname, a pronoun, a pet dog’s name, a time, a place, a concept, and, sometimes, a coined English expression—“the thirdxelf”—etc.

In this two-volume masterpiece, Li presents a caricature of a group of people revolving around the project of building the Institute of Supreme Harmony (Tai He). It’s a vanity fair, crowded with professors and researchers—some on Confucianist studies and others on history, philosophy, economics, and sinology—politicians and businessmen, Buddhist monks, masters on yi-ology, overseas students, publishers, gangsters, and thieves. They hover over the project with various agendas, while at the same time they gather together discussing The Analects of Confucius, citing lines from The Classic of Poetry and telling tales of anomaly in The Classic of Mountains and Seas.

Li juxtaposes academic discussions with gossip to fascinating effect. Everyone, even hotel managers, nuns, and gangsters, talks about Confucianist precepts, Buddhist interpretations, and local histories. While at the same time, within these macronarratives, they exchange untold secrets about schemes, scandals, and sex. Li skillfully and quietly weaves a web with his puppet characters. They are surprisingly knowledgeable, and intriguing allusions are everywhere.

This is a thought-provoking novel. Sometimes it’s like an academic work with explanatory footnotes, and readers can find critical comments in Brother Yingwu’s noisy mind. Li Er carefully knits contemporary Chinese scholars’ collective memory and their personal experiences into this novel, and he tactfully finds an echo in their hearts.