The Incompletes by Sergio Chejfec 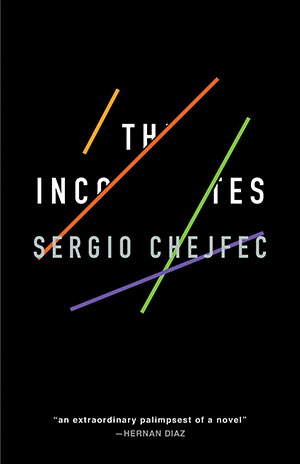 A novelist once said that writers come in two types. One is the storyteller, whose art originates in folklore and the oral tradition and whose work can be told and retold (or even adapted to a different medium, such as cinema) without a significant loss of meaning or narrative effect. The other is the writer in a literal sense, whose achievement is rooted in writing and dependent on it for all communicative and aesthetic purposes. It would be difficult and hardly productive (or even reasonable) to tell, describe, or film a novel by Sergio Chejfec, simply because in his case, the telling is no less important and meaningful than the tale and typically inseparable from it. And the “telling” (i.e., the writing) must be read in order to be fully comprehended and appreciated. In Chejfec’s case, it should be read silently and ruminatively in order to sample this master’s exquisite, multilayered prose style; and ideally it should be read in the original, unless a good translation is made available, as in the case of the book under review.

Originally published in Buenos Aires in 2004, Los incompletos is Chejfec’s eighth novel and his fifth to be translated into English, something for which we should thank Open Letter and its open-minded publisher. Unlike the anonymous friend of Chejfec’s previous novel, The Planets (1999), Felix is not missing but simply absent, having years before “decided to leave his country and survive in the world like a wandering planet” (my emphasis). This condition puts him in limbo, which the narrator populates with his own “interpretive reading” of the cryptic postcards he receives from time to time from his friend and from destinations like Plaça de Catalunya in Barcelona or the Hotel Salgado, a derelict establishment on the outskirts of Moscow, where most of the “action” in the book takes place. Here Felix and Masha, the only hotel employee he ever interacts with (although wordlessly and almost telepathically) and an offspring of the establishment itself (she is believed to be daughter of the mysterious Mr. Salgado), play a ghostly game of hide-and-seek through a series of “events that only barely occur” but at the same time take them constantly to the threshold of something—a possible encounter, a fateful discovery—that never happens, and (the reader eventually realizes) never will. Because the book’s subtle achievement consists in a fuguelike sequence of reciprocally revealing and perpetually elusive interfaces: Felix’s enigmatic postcards, the hotel logo, the bundles of banknotes that Masha and other staff members find in remote corners of the hotel, apparently left by a furtive “chronic guest” (a cameo reminiscent of Hasidic storytelling), and the “photography exhibition about the era of political violence,” which Felix visits in an “old, dilapidated home” in a “city facing the ocean” (we are not in Moscow anymore) and which brings the book to its cogitative close. Or not, since a “new era began that morning, a new time: one of waiting for the next memory to emerge.”

We realize that the title refers as much to the main characters as to the nature of literary representation itself—indeed of any kind of representation—whose existence and raison d’être are contingent on the presence of a recipient of some sort, individual or cultural. In this presence the storyteller and the writer meet, each one mirroring the incompleteness of the other.