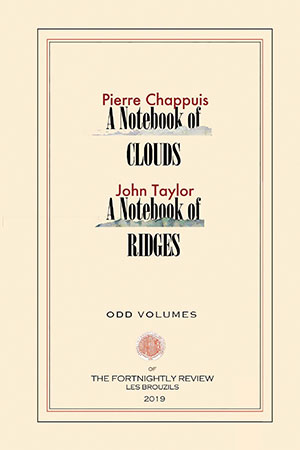 A uniquely valued genre in French letters is the cahier or carnet (notebook or journal). These collections are often like commonplace books and usually include not just pieces in verse form and prose texts but “notes, fragments, quotations, wordplay, and even meteorological facts” (to quote John Taylor) plus a host of other kinds of seemingly incidental writings including aphorisms, diary entries, and just random jottings. Taylor, the author of one of the cahiers under review and the translator of the other, is also one of our most astute critics of contemporary French letters as well as the translator of Pierre-Albert Jourdan, arguably one of the two best writers in this genre. The other, Philippe Jaccottet, succinctly identifies the premise behind this kind of writing in his axiom “Glance, do not aim.”

There is an inherent paradox in the cahier genre itself, identified by Chappuis in what his editor/translator here calls “A Preliminary Sketch.” This “sketch” precedes chronologically the cahier proper entitled A Notebook of Clouds, a composition that, the sketch speculates, “would presuppose a more or less incoherent sequence, a jumble of notes, spontaneous jottings: but some pieces have taken form.” The forms taken may be verse or obviously restructured “poetic” prose. The “confrontation of the two kinds of writing [creates] . . . similarities and divergences, parallels, as they overtake each other, ‘pursue’ each other.” This tension is what both the writer and reader of the cahier genre need to embrace. Taylor’s interpretive suggestion: “The book forms a whole that must be read as such.”

Perhaps. My own experience reading such “books” is that they are all entries in search of a whole, one that the reader, as often as not, needs to supply. By now, for example, Jaccottet has published at least three volumes of his carnets called La Semaison (Seedtime is the usual translation), this accumulation suggesting that “wholeness” is not an issue; rather, the nature of the broadcast “seeding,” which plants do naturally without human intervention, is what’s important.

From Chappuis’s Notebook, Taylor has produced, as the back-cover blurb tells us, “a nuanced translation . . . evok[ing] a bygone world of childhood when we . . .discover an entire universe in a passing cloud.” “Nuanced” we take on trust—this text is not bilingual, though Taylor is generally reliable and supple. The blurb correctly identifies the leaping, sometimes random-seeming, expansively meditative nature of Chappuis’s book. One key to the work’s coherence may be slightly obscured in translation. After previous entries speak of frontal, overcast clouds, the next observes, “Plentiful, crumpled, pushed aside, rough drafts clutter up the sky—the blank page routed.” What draws these images together, in French, is that the verb brouillier means to cloud over (also to scramble like eggs), while as noun brouillion means “rough drafts.” So, the book as a whole is constantly aware of its metasubject, writing, even as it observes the weather, quotes other writers’ use of clouds, recalls the visualizing of clouds in paintings, and turns cloudscapes into images of . . . a textured world.

The second part of the book is Taylor’s poetic response to Chappuis’s idea of “ridges.” However grounded in the author’s acknowledgment that ridges are not a feature of his native Iowa landscape, this notebook is rather more erudite than Chappuis. It stays very focused not only on actual ridges—for instance, on what Petrarch does not climb during his (in)famous ascent of Mount Ventoux—but plays out the word “ridge” through multiple languages. One may grow weary of some of this: “Ridge. Edge. Ridge. Ledge. (Grating half-rhymes.) // An almost impossible word to rhyme. // But remember: bridge. / The ridge is a bridge.” To be fair, as Taylor advises, read the book as a whole, if not for its bridging wholeness then for its “ridgey-ness,” one might say, for “There are days when all available paths are ridges, in one way or another.”