Blueprint: The Evolutionary Origins of a Good Society by Nicholas A. Christakis 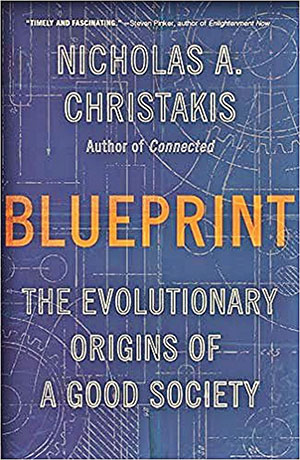 In a time when we stand more divided than we have in decades and global leaders treat international relations as zero-sum games, it is necessary to be reminded of our capacity for more. Yale professor Nicholas Christakis’s latest book, Blueprint, does just that. Often when our evolutionary past is invoked within the context of sociology or politics, it is to unveil our primitive urges, which have served our species in a distant past. Christakis’s view on the interplay between our genes and the cultures and societies we build is much more nuanced and adds significant weight to the other side of the argument.

“It’s not our brains or brawn that allows us to rule the planet. [It’s] the human ability to construct societies,” Christakis states early in his book. He goes on to define what he calls “the social suite,” a set of eight traits, which include love for partners and offspring, friendship, social networks, and cooperation. The central thesis of his book is that this suite, encoded in our genes, is naturally present in all our societies and thus represents the blueprint for the kinds of stable societies humans can create—a staggeringly optimistic claim.

Much of the book centers on various historically and geographically widespread examples of societies and how, despite their tremendous variety, the social suite manifests in each of them. From shipwrecked crews that go on to form new societies facing existential peril, to artificial societies in sociological experiments, to a number of natural societies spread across all continents, the discussion of these cultures alone makes Blueprint a worthwhile read. An exception to the rule that the author discusses is the Na of Tibet, a tribe of a few ten thousand members, where no lasting partnerships between a man and a woman are tolerated. But even this society is not fully capable of suppressing the innate human capacity for romantic love—couples leaving their village to be able to share their lives is not uncommon. Further outliers include the few societies that have no friendships and a society that does not allow their children to play. In all these cases, however, Christakis emphasizes that it takes very strong cultural forces to suppress the tendencies of our social suite.

“Our evolution has shaped not just our bodies and minds, but also our societies,” Christakis contends, stressing that “cultural evolution and genetic evolution should perhaps not be treated as separate at all.” He advocates abandoning the strict “within-our-body” genetics altogether and gives a wealth of examples, where anatomy or behavior has evolved in a way that is dependent on the presence of certain genes and abilities in other organisms. Human speech might be one of the most direct illustration of this principle. Genes and cultures both evolve in response to the other, without being clearly separable. The social suite is an evolved expression of our genes outside of our bodies, something Christakis calls “exophenotype” and Dawkins before him has referred to as “extended phenotype”—something that an organism is genetically compelled to enact. Whereas classical examples of extended phenotypes are birds’ nests or spiderwebs, structures encoded in an organism’s genes built without any prior learning, Blueprint takes this concept to a new level of complexity with the societies we build.

In his preface, Christakis gives some implicit credit in stating that “our good deeds are not just the products of Enlightenment values. They have a deeper and prehistoric origin.” However, when he later comes to develop the holism of genetic and cultural evolution, he fails to discuss how reason, science, or humanism might imprint on our biology or vice versa. In both his optimism and data-heavy arguments, Christakis’s book resembles Steven Pinker’s Enlightenment Now, published only a year prior, in which the author builds the case for Enlightenment values and their role in the prosperity, health, and happiness of human societies that have adapted them over the past centuries. To a degree, these books feel like two parts of the same project. It might therefore seem disappointing that, when Christakis discusses the inherent interplay of biological and cultural evolution, he fails to pick up what he had shyly referenced at the beginning. Much less does he give an opinion on the looming question of whether the social suite will ultimately suffice to ensure the survival of our species.

For its few shortcomings, Blueprint offers a wealth of insights into our own and other species’ biological origins, the social structures we live in, and the causal relation between the two. And for the few that might walk away unconvinced of our genetic propensity to build good societies, there remains the pure fact that we live socially, which might suggest that the benefits outweigh the costs.