Until Stones Become Lighter Than Water by António Lobo Antunes 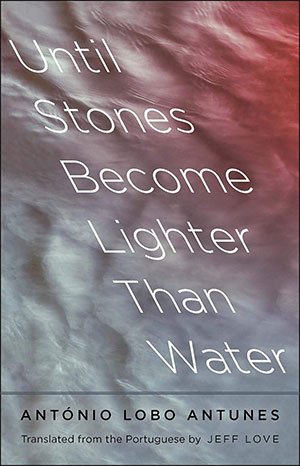 War is not pleasant to read about. If, by some chance, you should ever forget that, it may be time to pick up Until Stones Become Lighter Than Water, the most recent novel from one of Portugal’s most critically admired authors. Approaching once more the colonial atrocities of the Angolan War of Independence, António Lobo Antunes shows in as visceral a way as possible the haunting presence of past violence.

On the day of a traditional pig slaughter, a white war veteran meets with his adopted Angolan son, a childhood survivor of a village razed by his Portuguese unit. Both deeply traumatized, they are filled with memories of Africa and of the day the “second lieutenant” became “father.” Both are preoccupied with the estrangement they feel from those who ought to be closest—“always ‘Sir,’ never ‘Father’”—“always ‘Boy,’ never ‘Son’”—and wracked by the unbearable overlap of war’s depravity with would-be intimacy, a theme captured in the narrative’s piled-on timelines, spun in a messy, mud-colored thread that causes the hospital psychologist (a potential anchor-point that the novel casually bypasses) to cry, “Stop! All of that has been over for a long time.” But it is not; for the two main narrators, whose minds are crackless caves in which no echo, once admitted, ever diminishes, the past is vividly now.

The story is recounted in a stream of consciousness through multiple narrators with a shared iconography, recurrent symbols—the lace nightshirt, the G3 rifle, the manioc, the knife, the cancerous “stones” carried deep within—forming the book’s principal binding agent. Frequently noted for its echoes of Faulkner, Lobo Antunes’s prose is dense and recursive, chunks of thought masterfully split or spliced with dialogical interjections in a style essential to his fundamental experimentation with tempo (both “time” and “tense,” in the Portuguese). This monumental translation task is bravely approached by Jeff Love, who at moments even manages to convey some of the grammatical eccentricities generally unavailable to English.

Yet, often, the narrators’ thoughts move beyond parallelism, verging on stylistic indistinguishability. The fact that both the father and his two children have the same military vocabulary with which to dwell upon the same events; that their anxieties about intimacy take identical structures; and that sometimes they seem to share phrases that, given their estrangement, we would not expect them to have swapped, all make it difficult to differentiate perspectives. (The issue, it bears noting, has been observed by at least one reviewer of the Portuguese original as well.) Or perhaps this is another angst the book foists upon its readers: watching these characters experience such isolation when in fact they are only faced into separate corners of the same mental space, more a family than they realize.

With an aching lyricism and a set of family relations worthy of Faulkner’s darkest, Until Stones Become Lighter Than Water is a book that begs rereading and, generally, rewards it.