The Capital by Robert Menasse 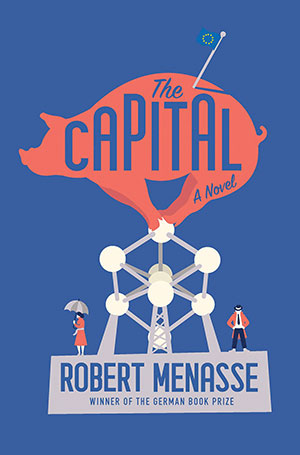 We meet The Capital’s main characters in a central Brussels plaza where they are trying to get out of the way of a runaway pig creating havoc. Pigs are also at the center of an economic issue bedeviling the EU. The biggest pork importer, China, refuses to deal with the EU, preferring to play countries off against one another. Within the EU Commission, pork “belonged” to three different directorates-general; the live pig to AGRI; the ham, sausage, ribs, etc. to GROW; and, when exported, to TRADE.

Such infighting makes for brilliant bureaucratic satire as does the status seeking. Our leading bureaucrats are mostly in the lowly Directorate-General of Communication, indeed, in its lowliest Department of Culture. While becoming head of this department had been a promotion in position and title for Fenia Xenopoulou, Culture is beneath her ambitions. When her department is tasked with coming up with a “big jubilee” sort of affair to celebrate the commission’s “birthday,” she thus quickly hands this down to subordinate Martin Susman.

Such a jubilee seems direly needed because, in sharp contrast to the positive poll ratings of the EU Council, president, and Parliament, the EU Commission has gotten a bad rap. It is, after all, the EU’s powerful (and unelected) “enforcer.” Susman is an EU idealist (and an Austrian intellectual) and thus believes that any such “jubilee” should celebrate the commission’s foundational idea(l). (These are among many entertaining evocations of fellow Austrian Robert Musil’s classic The Man without Qualities.)

For Susman, the foundational idea(l) of the EU is a lapidary “never again” to world war and especially the Holocaust. But how to celebrate? Round up all the survivors? Not even Steven Spielberg has such a list! But the obsessive records kept by the Nazis in a nearby deportation center identify all the individuals on the last transport out. Also identified are the handful who escaped thanks to an attack on the train by Belgian resistance fighters. And lo and behold, escapee David de Vriend is right here in Brussels, just retired to an assisted-living home.

Meanwhile, Brussels has its own international problem. There’s been an assassination, and, in the havoc wreaked by the pig, the assassin has made his escape. Police Inspector Brunfaut is on the case. But he’s suddenly ordered to drop it—on highest authority. NATO? The CIA? No, the order comes from a much higher organization: no one must know that its operative had shot the wrong man.

Then there is Florian Susman, new president and hence head lobbyist of the European Pig Producers, now in Brussels to see how little brother Martin can help him in the commission. En route later to a meeting in Budapest, he’s slowed down by a mass of refugees crossing the border and then almost killed by a cab driver who is racing refugees to the Vienna train station as fast and frequently as he can. But the head of the European Pig Producers is saved by a Muslim woman—a truly ironic Pietà image that is broadcast around the world.

Yes, Menasse has an agenda: more unity in the EU, less of the recrudescent chauvinism, more help for poorer neighbor countries and for refugees. Perhaps, too, such a more ideal union should have a capital more reflective of these ideals. It is this that his title refers to, not Brussels, but we’ll leave that quixotic errand for the reader to enjoy. While his critique of these political failures is trenchant, its satirical delivery is wryly engaging and often laugh-out-loud funny. It richly deserved the big German Book Prize in 2017, and this fine translation will spread its hugely rewarding pleasures far more widely.