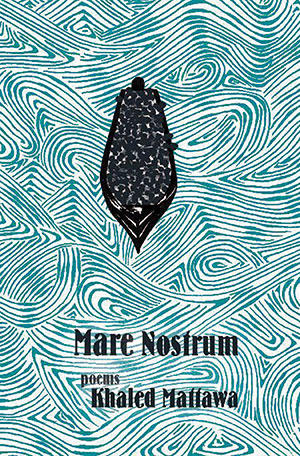 Khaled Mattawa’s Mare Nostrum is a lyrical account of the plight of migrants fleeing into Europe during Italy’s Mare Nostrum operation in 2013. An attempt by the Italian government to address the migration crises, Mare Nostrum included a substantial element of search and rescue, efforts depicted in harrowing and heartbreaking ways in Mattawa’s slender volume of poems.

Mattawa approaches his subject with delicate lyricism, relying on image and sound rather than direct statement. In this evocative approach, various voices emerge to speak through his verse—refugees, human traffickers, rescue workers—without ever really settling into a set perspective. Images sometimes float freely from their contexts, and as appropriate for the subject, there is a sense of rootlessness, of drifting. The book is thus polemical only in that it is an act of witness, humanizing the migrants in their own voices. One poem, for instance, traces the speaker’s attempt to connect through his cell phone with a beloved left behind: “An empty once-crowded barracoon / where the signal is one ribbon strong. / It is from here that I send all my love.” Such moments help to personalize for the reader those involved in events that might otherwise be numbing in their proportions.

Mattawa blurs the line between exile and pilgrimage, between refugee and pilgrim. Doing so suggests there is something sacred in the trauma of the homeless, an encounter with the mystery of suffering and of survival. He writes of drownings, fuel burns, and other horrors experienced in human migration, and in doing so he confronts the reader with a reality far too easy to ignore in our comfort and isolation. But rather than throwing up a wall of factual reporting—the kind of thing that can contain the tragedy and safely distance us from it—Mattawa invites the reader to try to inhabit the perspectives of the various voices of migration.

“You remember weddings and feasts. / Hail pocked the copper dust, and you, / opened mouthed, gazed at the world,” he writes in “Psalm for the Balkan Route.” The undefined “you” in these lines reads like an invitation to place ourselves in the experience. Yet, as the poem gives us memories that are not our own, the pronoun is also a reminder that we can never fully inhabit these experiences. This is a path to compassion without arrogance and mystery without indifference.