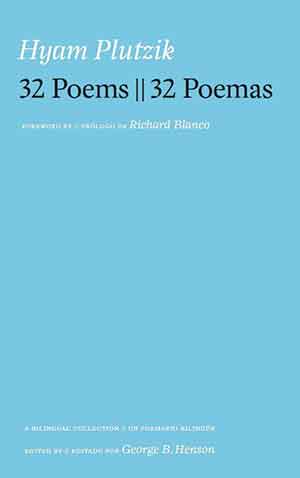 LANGUAGE OFTEN TAKES on cardinal importance for the displaced. Immigrants, exiles, and their children have historically found new homes in the republic of letters. Such was the case of Hyam Plutzik, the poet whose work is compiled in 32 Poems / 32 Poemas, born in Brooklyn in 1911 to Belarusian parents who spoke Yiddish, Hebrew, and Russian in the home. Plutzik learned English late in childhood, only to discover his vocation as an English-language poet: “Out of my life I fashioned a fistful of words,” he writes, and “when I opened my hand, they flew away.”

32 Poems / 32 Poemas is a remarkable tribute to a poet who crossed linguistic borders. The book consists of thirty-two of Plutzik’s poems with accompanying translations into Spanish, completed by fifteen different translators. It lends itself to being read not only as a verse collection but also as a work of translation, with translation not an editorial feature but a literary mode unto itself, as Walter Benjamin suggested. If poetry is “the humanizer of knowledge,” as Plutzik puts it, then translation is the vessel by which knowledge, once humanized, is conveyed.

In the afterword, Edward Moran aptly describes the book’s translators as “deft scribes with forked tongues.” Indeed, the team effort carried out by these fifteen translators—as well as the outstanding editorial work of George B. Henson, the foreword by presidential inaugural poet Richard Blanco, and the afterword by Moran, a literary historian and Plutzik expert—is worthy of the highest praise. It is especially encouraging to see this project coming from Miami press Suburbano Ediciones, which, along with peers like Katakana Editores and Alliteratïon, is cementing Miami’s well-deserved status as a center for literary translation and independent, bilingual publishing.

In a moving coda, Plutzik evokes the city of Granada: a city that “killed its poet,” Federico García Lorca, as he fled the right-wing militants of the Spanish Civil War—and a city, it must be said, that burned any Arabic or Hebrew manuscript left unhidden as part of the gradual expulsion of its Jewish and Muslim communities some four hundred years before. Poetry and creativity in general are still vulnerable to this same violence, whether through direct attack or callous attrition. 32 Poems / 32 Poemas is a small victory in the struggle against such aggression. It helps poetry along, extending rather than abbreviating its journey through the world as only translation can.