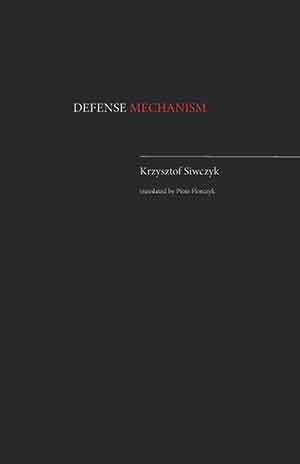 KRZYSZTOF SWICZYK (b. 1977), known for his love of performance arts and multiple media, reflects on the inadequacy of language in his prose-poem-play Defense Mechanism. Carefully constructed to alternate light, space, and sound, his text is a miniversion of Plato’s myth of the cave, Sartre’s No Exit, Beckett’s Waiting for Godot, and Solzhenitsyn’s One Day . . . all rolled into one. It is a parable about the creation of the world in a postindustrial setting, a trivial fight between self and alter ego, a Freudian regression/rebirth, an echo of the current pandemic, a parable of the absurd, or a timeless love story. Given the open meaning of the Polish original text, the book’s translator faces multiple challenges. The phrase “coś się w nas bawi” is translated by “something is playing inside us” but could also be read as “something is playing us” or “something is pretending to be us.” Piotr Florczyk could have produced a more colloquial, easier to read version. Instead, he chose the broadest meaning possible for each phrase, a felicitous choice.

Defense Mechanism consists of sixteen episodes of varying length that follow the Greek tragedy’s prescription of one space, one time, one plot. The stage decor consists of nondescript objects: a room (compared to a jewelry case), a window (with a second window behind it), heavy curtains, black plastic wrap, adhesive tape, a bed, and a chair. The characters—including two figures that speak, hands, and two hollow black holes symbolizing mouths—are anonymous and quasi-abstract as well.

In this carceral environment, light meets language from dawn to dusk, evoking the biblical story of creation or the ancient belief, supported by science, that the first idea/word was a wave, born from a fissure of light. Light and language cause the two figures to struggle; they both die in the end. The text contrasts natural, diffuse (passive) daylight coming through the window to the sharp lighting of a stage projector (active). Daylight is controlled by the curtains and black plastic tape while the stage projector controls where to focus its artificial light. Separating them midway through the text, total darkness creates a faint glow, signaling a series of situation reversals, in which the tight structure of the text is strengthened by an almost endless series of correspondences.

The two voices/figures, complementary and inseparable, engage in an argument about who speaks what, their entire discourse an exercise in opposites. They switch roles, as Voice 1, which was dominant at dawn, becomes tenderly gagged by Voice 2 in a symbolic burial. If the daylight provoked panic and a burning sensation in Voice 1, the stage projector’s light provokes its intense desire to flee and a deep burning sensation that only subsides when the light weakens.

Florczyk, who has won awards for his translations from Polish, is an academic, a poet, and a founding editor of Calypso Editions, a nonprofit run by artists. Defense Mechanism is the very first volume of his new editorial venture, Textshop Editions, also a nonprofit promising to release its volumes in open-access electronic format once the print run is over. Siwczyk, who debuted in 1995, has won numerous literary awards, including the 2014 Kościelski Foundation Award. He has authored a dozen poetry volumes and been translated in many languages (see WLT, Sept. 2016, 96). Dark and thought-provoking, Defense Mechanism not only links two young artists into a novel author-editor relationship, but it masterfully brings a coda to the existentialist vein that has dominated European culture since World War II.