The Woman from Uruguay by Pedro Mairal 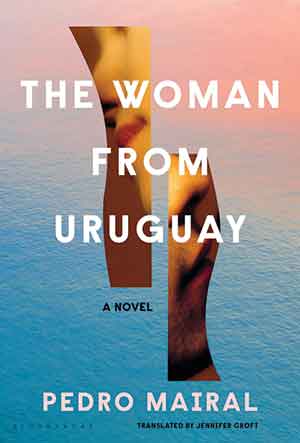 JUST HOW MUCH can change in a day? For Lucas Pereyra, a fortysomething Argentine writer stuck in a rut—in his work, his marriage, his life—the answer is a lot. And all it will take to push him over the edge is a short trip across the River Plate to Montevideo, where he heads one morning to collect an advance on his novel-in-progress, a magnum opus set in Brazil: “This was going to be my great novel. I could sense it,” he writes. “A guy who leaves his wife and kids and disappears in Brazil, transforms into somebody else. . . . I was going to explode Spanish and then branch it out like a tree in every direction, a thousand things were going to happen, on the beach, in Brasilia, in the Amazon, lots of sex, and boats down huge rivers and contraband, drugs, shamans, shooting, wild parties, stories inside stories, it was going to be my Ulysses, my Devil to Pay in the Backlands, my total novel.”

Upon arriving on the shores of Uruguay, the fog begins to lift for Lucas, as he looks out at “the friendly, broken, undulating landscape, so far from the fucking metaphysical pampa of Argentina.” The buildings of Montevideo, familiar yet old-fashioned and exotic, soothe him, and he begins to shake free from the weight of his life as a broke writer and stay-at-home dad, stuck in a “paralyzed” relationship with his wife, Catalina. Not surprisingly, there also happens to be another woman involved: Magalí Guerra Zabala, twenty-eight, “the woman from Uruguay,” whom he fell for at a beachside literary festival months before and is planning to rendezvous with in the Uruguayan capital. He can barely contain his anticipation: “I was in love with a woman and in love with the city where she lived. And I made up everything about it, or almost everything. An imaginary city in an adjacent country. That was where I walked, more than down real streets.”

The Woman from Uruguay gathers momentum and sparks as Lucas and Magalí eventually meet up at an outdoor café and plot their afternoon seduction over multiple rounds of drinks. Inevitably, though, their plans go awry, and the day takes on a sinister, hallucinatory edge—involving a trip to a tattoo parlor, possible UFO sighting, snarling pit bull, and angry ex-boyfriend—before finally erupting in violence. Has Lucas been deceived all along by Magalí, lured by Montevideo’s laid-back charm (and public pot-smoking)? Has he been set up, an easy target for street thugs with his pockets for once full of cash? “You have to be careful with Montevideo,” a friend admonishes him. “Montevideo will kill you without a second thought. Every now and then it does, just lays somebody out.”

Mairal, himself an acclaimed and best-selling Argentine author, has written a gripping adventure novel of the mind—rendered in pulsating prose by Jennifer Croft—of a middle-aged writer’s delusions and spiraling collapse. But even after Lucas hits rock-bottom, he’ll discover new, truer ways of being both a father and writer. “I’m working on a book of poems, and, very slowly, another novel,” he later explains, “but no Amazonian adventures, no narcos or gunfights or knives, just a few kicks on the other side of the river.” Crossing the River Plate has had a profound effect on Lucas, and nothing will be the same again.