The Voice Over: Poems and Essays by Maria Stepanova 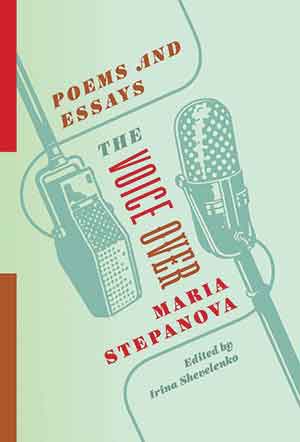 THIS AMBITIOUS COLLECTION provides English-language readers with a systematic introduction to the work of one of Russia’s most important contemporary poets, Maria Stepanova (b. 1979). Stepanova’s verse is challenging, rich in literary and historical allusion, and offers readers a layered and immersive soundscape. Poems that capture the minutiae of everyday Russian life—curtains fluttering in train windows, slippers clattering against a woman’s heels as she moves across a parquet floor—shift to expose the horrors of the past (labor camps, searches) or contemporary social problems (domestic violence, despair, war).

Snatches of folk music and wartime ballads echo through Stepanova’s verse, as do fragments of classic poems by Blok and other authors. Her lyric I shifts, taking on new personae and employing new vocal registers—an aspect of Stepanova’s art that she explicitly comments on in her masterful long poem Spolia:

(voices “she has adopted,” in quote marks:
obvs anyone-without-an-I cannot adopt anything)

Stepanova is a sensitive and interesting essayist. The prose pieces in this collection provide a sense of her grief over the current state of Russian political life and insight into her literary passions. She bemoans Russia’s drift into nostalgic nationalism, noting that the “feverish return to the past” which characterizes current Russian life suggests a lack of faith in the future and the “absence of a present.” She also writes sensitive essays on the work of major twentieth-century Russian poets (Marina Tsvetaeva), German novelists (W. G. Sebald), and authors of well-known ego documents (Liubov’ Shaporina, Alisa Poret) as well as on the role of the poet and trends in Russian poetry.

One of the most interesting and innovative aspects of this edition is its focus on translation. The first pages of Irina Shevelenko’s preface highlight the differing choices made by the translators whose work is included, such as the extent to which they have tried to preserve the metrical and rhyming structure of Stepanova’s verse. Headnotes by translators sometimes comment on similar issues. Eugene Ostashevsky provides a note explaining the rich web of historical allusions in Stepanova’s cycle Young Maids Sing and his own decision to borrow from English translations of Tang dynasty poetry in his efforts to capture Stepanova’s meter. Sasha Dugdale comments that “War of the Beasts and the Animals is impossible to translate in a superficially ‘faithful’ way”: it contains too many allusions that “are simply not accessible to a non-Russian audience” and then explains how she worked—with the poet’s permission—to find substitute images “with a currency in the UK.”