Another End of the World Is Possible: Living the Collapse (and Not Merely Surviving It) by Pablo Servigne, Raphaël Stevens & Gauthier Chapelle 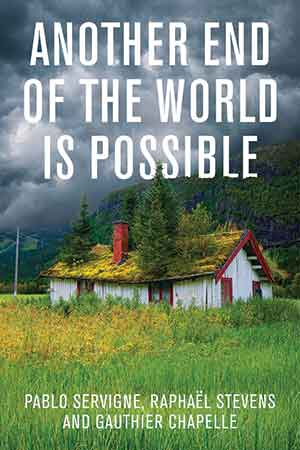 PABLO SERVIGNE AND Raphaël Stevens became household names in some circles with the concept of “collapsology” described in their book, How Everything Can Collapse: A Manual for Our Times (Polity, 2020). In it, they sought to prove with statistics, observations, patterns, and models that the world as we know it is already in a state of environmental, economic, and consequently, political collapse. Now, together with coauthor Gauther Chapelle, they have published Another End of the World Is Possible: Living the Collapse (and Not Merely Surviving It). In this sequel, the goal is to develop a philosophical response to collapse, a “collapsosophy,” that will ostensibly help individuals and communities during the ever-worsening collapse.

Although it is not explicitly stated, the most compelling reason for publishing a guide or “user’s manual” (mode d’emploi) for the collapse is because the historical responses to large-scale disasters, environmental, and economic collapses tend to have less than happy outcomes. The sudden loss of sustenance and the imminent end of the world to which everyone has become accustomed (if not wholly content with) trigger the highly manipulative use of apocalyptic narratives to hold “true believers” in thrall to ruthless yet charismatic leaders who promise survival in the here and now and utopia in an afterlife. Avoiding a world of competing doomsday cults that would further degrade life on earth with wars and mass suicides is one of the implicit goals of “collapsosophy” as developed by the authors.

But, will it work? Collapsosophy is an amalgam of philosophical thinkers, who address ethics, ontology, and spiritual ideas. The assemblage is mediated by the 1960s notions of the social construction of reality and later notions of the social construction of science. Their integrative approach seeks to help people and communities identify and confront the end of the world, and then accept it with grace, dignity, and mutual support. It is an admirable goal, and perhaps the approach will work.

However, there are some cracks in the structure, even in the beginning. For example, Part One: Recovery, recommends using the experiences of collapses such as the former Soviet Union, and evaluating the depression, substance abuse, intimate partner abuse, suicides, and more that resulted. The difference was that there was a “return to life” after those collapses, and in the predicted collapse, there is no natural rebound. Further, the authors suggest breaking the news of the world’s “terminal illness” by using the same techniques as the medical profession. There is a profound fallacy in the analogy, however. An individual can make arrangements to deal with the pain, and also think of legacies. If an entire society is facing extinction, support systems for end-of-life care and legacies for future generations lose their meaning.

Part Two: New Horizons encourages new ways of analyzing data and patterns, and bringing together previously unconnected areas of thought. They encourage extreme interdisciplinarity, and “complexity sciences” to look at how to incorporate qualitative as well as quantitative data into science, and to problematize working hypotheses. The goal is what various philosophers of science have called a “post-normal” science that admits new ways to solve scientific problems when the facts are in question, values are in conflict, and urgent, high-stakes decisions must be made. In this way, one can blend all kinds of knowledge, values, and beliefs to analyze solutions. If the experiences of social media are any measure of how this “post-normal” approach might work, one should approach the authors’ recommendation with skepticism, simply because our brains have a limbic system as well as a cerebral cortex. The danger of “post-normal science” is that we wade around infinitely in a swamp of confirmation bias, where the most inflammatory and emotion-triggering images and statements will prevail. With our reptilian brains, pathos will always devour logos and ethos.

Part Three: Collapsosophy is, in essence, applied philosophy, with the dominating metonymy being that of weavers and weaving, to make whole the torn cloth of our world, and by extension, our reality. In it, the authors admonish the readers to shake off the state of permanent adolescence promulgated by a capitalist, consumer-culture world, and to embrace adulthood. The weaving involves bringing together spirituality and the material world to create “rough-weather networks” and to build bridges from new, agreed-upon zones: defended, autonomous, sustainable, etc. The key weaving process will take place through social networks, and, like mycelium in the soil, we will be knit together by means of groups where we will listen without judgment, and share our perspectives to solve urgent problems.

The book ends by asking the reader to ask, What use does the human species serve among other species, and what is its role in the chain of life? The answer is not given but is tacitly suggested: we must use our intelligence and our abilities to communicate and create technology to be good, facilitating stewards of all life.