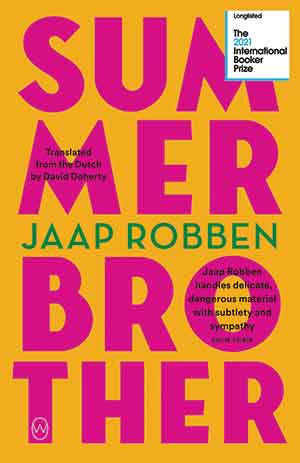 SUMMER BROTHER, Dutch writer Jaap Robben’s International Booker Prize–longlisted novel, begins with a weighted query put to a shiftless and uncaring father. “So, my question to you is: would you be willing to care for Lucien at home this summer?” The care home where mentally and physically disabled sixteen-year-old Lucien lives is being renovated. Lucien’s mother, having remarried, is away on a honeymoon. Maurice, Lucien’s father, and Brian, his thirteen-year-old brother, are insouciant, scheming caravanners who live with their two dogs in a scrapyard on the outskirts of civilization. “This is no place for kids,” Brian more than once has heard his neighbors say about his domestic situation. Ostensibly loathe at first to assume responsibility for his older son for this very reason, Maurice is however quickly cajoled by the promise of financial recompense from the facility. He takes Lucien in but leaves Brian to minister to him. Summer Brother is about the encounter of the two brothers, the “familiar strangeness” they suddenly find themselves contending with, and their adventures and mishaps, as they bond over a fateful summer while fumbling for ways to survive their mutual abandonment.

Relayed in brief vignette-like chapters that are vividly rendered in David Doherty’s translation, Summer Brother offers a moving, if hard, look at life within a damaged family. Robben observes how the two brothers commune with and chafe against their environment with humane minutiae. With their testy and boorish father unexplainably gone during the day, home is at once refuge and site of exposure. Brian unwittingly leaves his brother to burn in the sun. He grapples to sort his pills and, in the process, kills a beloved dog. He excels in the smaller tasks: changing Lucien’s diapers when they are full, taking him out to walk, swim, and smash bottles at the bottle bank (the few recreations, albeit not without perils, that their environs allow); trundling him around in a wheelbarrow when the latter tires or acts out; waiting out when he wants to wank; and wiping his belly clean when he’s done.

Summer Brother, however, is no tale of heroic self-sufficiency. Brian’s initiative would have been admirable if not for the fact that it exposes Lucien to danger. Brian is a young man in thrall to the first tugs of pubescent love. His idealism is reckless. He leaves Lucien tied to his bed for hours at a time while he goes to meet Selma, a nineteen-year-old inmate he befriends at Lucien’s care home. “As long as you don’t turn over, it won’t hurt,” he tells his brother. He thinks he can get Selma out of the care home, unnoticed. Seeing his mysterious tenant-neighbor Emile’s phone, he wonders if he “could buy two phones and give one to Selma. We could call each other without anyone knowing.”

Yet though it is told from Brian’s jejune vantage, the story’s conscience is irrefutably adult. Is his friendship with Selma healthy? Given Selma’s compromised acumen, can she really consent to the “belly-belly” game Brian is ever eager to indulge in with her? How are we, too, to construe Brian’s pull toward Emile, the way he becomes aware of, and perhaps even finds some unspoken comfort from, “[their] hands touch[ing] briefly”? Can we trust his father to protect him?

There’s a deceptive directness to the book: the story it seeks to tell, that of two brothers finding each other against the odds, is straightforward enough, but its concerns and wonderings are not. Summer Brother is a work of rare intricacy that warrants to be read with all the seriousness one can muster.