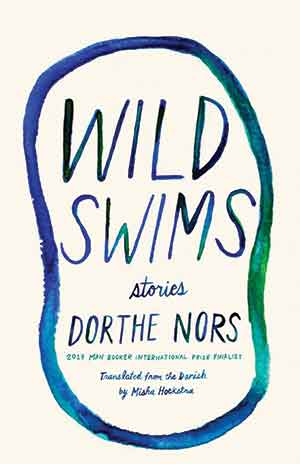 WILD SWANS, the second short-story collection by Danish author Dorthe Nors, makes its US debut with fourteen mini-tales, nine brand-new. Ranging from four to seven pages, the stories are small sips ending in dark rum punches. The book appeared in Denmark as Kort over Canada in 2018.

Most pieces convey remoteness, in landscape as well as character. Even in large cities there’s a bareness. People neither exude joy nor connect with one another. Nors teases at times with a cozy beginning, but eventually the murky underbelly emerges. Hygge, that Danish sense of coziness, never lasts long.

In fact, the aptly titled “Hygge” is a good example. The initial, contented feeling between an aging professor and a woman named Lilly slowly merges with his memories of Aunt Clara, progressing to bitterness in his mind. The tale begins with a relaxed tone: “Then we were sitting there, Lilly and me, and she had made coffee and baked one of those chocolate cakes that are soft in the middle.” Yet four pages later, it ends peevishly: “When it was all over and done, it looked as if she was forcing me, and I didn’t like it.”

Nors withholds information, structuring plots out of allusions to past events not fully told—reminiscent of Ann Beattie, Raymond Carver, or William Saroyan. Nors embeds a man in a deer stand with a broken ankle but takes away his cell phone. She places a woman on a writer’s retreat near an ex-lover’s mother and they befriend each other, or do they? The twists Nors inserts veer toward the bleak yet encapsulate relatable emotions in sometimes witty ways.

Nors highlights the impact of recollections on current behavior in simple prose with emotional clout. “By Sydvest Station” shows two girls pretending to collect Cancer Society donations while one mulls over her relationship to a guy who declared it wasn’t love, when she’d sure thought it was. In “The Fairground,” a woman rents a house by an abandoned fairground, where she ponders differences between childhood love and the recent rejection by a man she loved. Josefine Klougart, another Danish writer, also captured lost love eating away at a person in her novel One of Us Is Sleeping.

Nors juggles adeptly, often keeping several story strands aloft and then abruptly walking away, leaving them suspended in midair, powerfully unresolved—as in “Compaction Birds,” when a widowed professor drives to a tryst with a woman and ends up in a debate with her relatives about barnacle geese.

The six-page title story, “Wild Swims,” illustrates disparities between reality and our experiences. “It was a muted life,” muses a woman cooling her feet in her fridge on a hot summer day, remembering when she’d waded into Pigsfoot Spit with her childhood friend Emilie. The woman wants to swim in a moat by a fort but ends up at the pool. Regretting she’d gone, she realizes “I give up only reluctantly,” unlike Emilie. It’s a poignant take on missing someone no longer in your life.