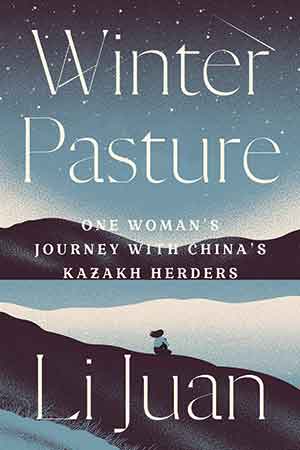 READING WINTER PASTURE, Li Juan’s account of her time with shepherds in the foothills of the Altai Mountains, I was reminded of Polish anthropologist Bronisław Malinowski. In the early twentieth century, Malinowski traveled to the Trobriand Islands to live and play among the locals, making notes while paddling between islets on outrigger canoes to observe intricate gift-giving ceremonies. His experiences, captured in his 1922 book Argonauts of the Western Pacific, established a new kind of methodology for ethnographers and writers alike. Suddenly, it wasn’t enough to simply observe quietly from the bushes, as one might a clutch of birds: those strange beings on the fringes of Western society were people too. How much an observer understood became linked with just how dirty they were willing to get their hands. Since Malinowski, the rule has been: you must not only go, you must do.

And do Li Juan does. For three months in the harsh winter of northwestern China, she shovels sheep shit, hems clothes, and throws herself up onto camels to round up the herd in the blinding cold. The work is hard, the amenities threadbare. Inside the herders’ home—no more than a burrow dug into the earth—the family huddles around a stove, eats boiled meat, and shares a sleeping platform. Her three months in the winter pasture verge on an ordeal and make for a wonderfully jaunty book.

It’s possible to romanticize the lifestyle, but the pragmatic Li nips those feelings in the bud. “The reality,” she writes, is “one of desolation, loneliness, and helplessness. In reality, year after year, everyone must submit to nature’s will, oscillating endlessly between south and north. . . . They are forever departing, forever saying goodbye.” It’s a harsh landscape, not a loving one. Humans suck the marrow out of boiled bones; sheep paw through dry scree for a blade of grass; dogs are thrown frozen lumps of blood to lick.

Faced with similar circumstances—a dome of sky, a sweep of desert, the ear-pinging quiet—some might turn to contemplate the smallness of mankind. Li doesn’t dwell on such pishposh and tacks in the opposite direction: “Scanning the land from the peak of a dune, the human body seems no bigger than a leaf. But how can people possibly be considered small in a world like this, where signs of human activity are what leave the deepest marks?” Humans, she rightly notes, orient their entire world around them—they look for signs of each other, seek one another out across expanses so wide and open, the curve of the earth is visible. For those who seek human contact, for those whose lives depend on it, “everything races relentlessly their way. Indeed, the whole world orients itself around them. They are the masters of the wilderness.”

Winter Pasture was a long time in translation, and, as has been pointed out by many before, books about China tend to date quickly. The book was first published in 2012—and though it will be most readers’ first encounter with these Kazakh herders, it may also be their last chance to read about them in action. A decade ago, Li was told regularly that the year of her visit would be the last for the herding families. They sense the outside world closing in on them, the whipcrack of official policies lashing harder than the wind.

That, of course, points to the other master at play in the Chinese highlands. Xinjiang Province is known to the world as the location of China’s Uighur “reeducation” camps. Li is Han Chinese, and, while any personal feelings about her nation’s governmental policies remain unstated, passages about government-instituted “Grassland Restoration” projects and land expropriation read as soft acknowledgment of Beijing’s attempt to corral these Kazakh nomads. In 2003 the Chinese government instituted tuimu huancao, an initiative to “retire livestock and restore grassland.” Their lifestyle blamed with damaging their ancestral grasslands, these nomadic pastoralists have found their lifestyle once again at odds with the government’s monocultural aspirations. When Li displays shock at hearing a trader’s dire predictions for the nomads’ fate, he turns on her, asking, “Have we Kazakhs not suffered enough for you yet?” That these Kazakhs, like their Uighur kin, are Muslim, is given short shrift in the book, though perhaps there are limits to what even a writer as distant from the Chinese cultural scene as Li can get away with.

What appears as a simple story is, like all ethnographies, a tale of survival. The family revels in the smallest of amenities (a new hat, a set of batteries) and works feverishly to salvage what breaks—a moment of clarity comes as Li observes a furious effort to repair a disposable lighter. It is a hard life, but if they choose it, all the more power to them. As Li Juan notes, happiness is a thing of hope, not comfort.