More Than I Love My Life: A Novel by David Grossman 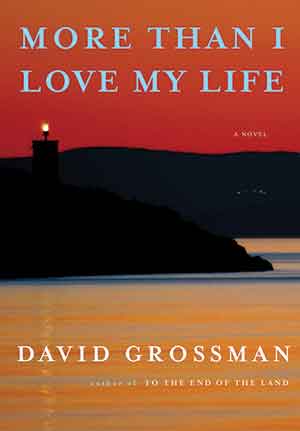 DEVOTED READERS OF the wondrously gifted sixty-six-year-old Israeli author David Grossman eventually fall hopelessly in love with him. There is a magically laced tenderness and perceptiveness that infuses his prose. He understands how quickly a life can be upended and spin violently out of control. He lost his own precious boy in the second Lebanon War. But even before personal devastation took hold of him, he was drawn to the suffering of others. He spent years in the West Bank chronicling the humiliating lives of Palestinians, which he wrote about in 1987 in The Yellow Wind. In his latest undertaking, More Than I Love My Life, Grossman begins with good intentions but gets swallowed by the overwhelming dysfunctionality of the family he writes about.

We are quickly introduced to a boisterous ninety-year-old woman named Vera, whose overenergetic charisma holds the others in thrall. But her feistiness conceals sins she carries with her from the past. Decades ago, she was married to the love of her life, a Gentile Serbian named Milosz, who dazzled her with his seductive charm and endless rhetoric about how the two of them would change the world. Milosz taught her to be embarrassed about the privilege in which she had been raised. When he was arrested by Tito’s forces and tortured, he committed suicide. Vera was brought in to sign a confession declaring him a traitor but refused to do so, even though it meant her being imprisoned at Goli Otok and putting her young daughter, Nina, out on the streets. Over the decades, she retells this story so many times that the grotesque act of maternal neglect which lay beneath it is whitewashed out of the tale, as is the perpetually distraught state of her daughter, who remains traumatized by her mother’s decision.

When Vera and Nina reunite and finally make it to Israel in 1962, Vera remarries a widower, agreeing to watch over his sixteen-year-old son, Rafael. Vera is unaware that the boy, Rafael, has seen her daughter, Nina, strolling about the kibbutz with her ashen face barely concealing her beauty. Rafael would fantasize that if he could make love to her just once, he could restore color to her face and light to her eyes. When they hook up a few years later, they have their own little girl, Gili, who becomes a troubled young woman and aspiring filmmaker. She narrates the novel with an unreliable shakiness that feels inadequate to the task at hand. Her quivering voice is possessed by the insecurities that plague her and her own maternal longings. When Gili was only three, Nina fled the kibbutz, leaving her daughter and husband reeling. We feel as if Grossman’s selection of her as narrator is off-kilter, because it is clear to us she barely understands her own agonies.

Gili has always been enthralled with her parents’ intense attachment and visualizes their first night together: “For a moment or two they were lost in their own world. I like to imagine them standing there with their heads bowed, as if listening to an emulsion beginning to fizz inside of them. That was, in fact, the moment when my family was created. It was also the moment when ultimately, I began to transpire.” Rafael continues to lean on Gili as she matures into a young woman, talking endlessly about his obsessive love for her mother. Although they both have spoken about the inappropriateness of such discussions, she remains the sounding board for his never-ending misery.

Grossman seems uncertain where to take us next. He has Nina return to the kibbutz after many years adrift. She seems to be in a deteriorating but determined state, eager to get authentic answers to questions that have haunted her. Readers realize they have questions too, because all the characters remain elusive; none of them have pierced our hearts. By the time Grossman sets up a climactic scene, which takes place on a trip they all make back to Vera’s birthplace, we have already given up on the lot. The catharsis we sense Grossman longs for takes place, but it is muddled by what has come before. Grossman’s genius has always resided in his ability to create unforgettable characters that could be cruel, impulsive, guilt-ridden, erratic, and complicated, but in which we could always find pieces of ourselves. He seems here to have lost some footing.