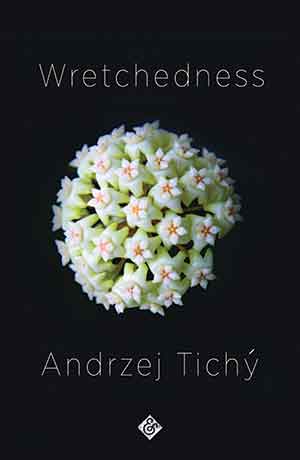 THE NOVEL WRETCHEDNESS begins with a chance encounter between a cellist and a homeless young man in Malmö, Sweden. It could be an everyday event, repeated in cities throughout Europe, throughout the world even. This meeting, however, sends the musician’s mind on a stream-of-consciousness journey to his past and what his present and future may have been, had his music not enabled him to escape from the housing projects and the hopelessness of their inhabitants. The narrator morphs from the protagonist to his associates and back, while the stage moves through the squats, the house parties, underground clubs, and drug-fueled nights in the less-desirable districts of Europe’s larger cities. At various points throughout, Andrzej Tichý (b. 1978) reminds us that we are but voyeurs to the suffering of this otherwise invisible underclass.

Music and rhythm flow throughout; it is the life-beat of the disadvantaged on the outskirts of urban societies and echoes their captivity. The tempo ebbs and flows, creating intense images of the true “wretchedness” of life and languidly portraying everyday disappointment and failure with but a few brief glimpses of hope when the musician resurfaces to the present and contemplates the Scelsi piece he is to perform. Nichola Smalley’s sensitive translation captures both the slang and gritty reality of the cellist and his friends. It is a language that incites both empathy for the almost inescapable fate of the youths and also awe at their resilience as the world around them repeatedly collapses.

Tichý is a Swedish author born to a Polish mother and Czech father. Wretchedness is the first of his works to be translated into English, while his novels and collections of short stories have been nominated for and awarded renowned literary prizes in Sweden. Smalley’s translation was longlisted for the International Booker Prize and won the Oxford-Weidenfeld Prize for book-length literary translations into English.

This novel will take you to places you have never been and hope to never actually experience. Wretchedness is a perfectly chosen title and aptly encapsulates the sustained sentiment of the novel.