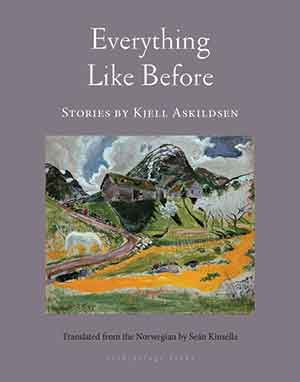 “I LIVE IN A basement; a result of having come down in the world, in every sense.” So begins “A Sudden Liberating Thought,” one of thirty-seven stories that comprise Everything Like Before, Norwegian writer Kjell Askildsen’s newest collection of fiction, which typifies his darkly ironic take on the absurd. Askildsen’s characters tend to experience spiritual injury in the form of an amorphous stab from the distant past, unknowable and condemning, that is brought into the present through an almost arbitrary impetus: the page number of a book, opening a second bottle of wine, or sharing a park bench with a stranger.

In the aforementioned story, an unnamed narrator’s peaceful walk through the park is interrupted by a stranger who seems to mirror the narrator’s own thoughts and actions. Only later is it revealed that the stranger is actually a judge and the narrator a convicted criminal from an age-old court case. Both crime and punishment are blurred by lack of detail, so this insight provides no resolution and instead preserves his life in the basement.

Askildsen’s interest in the condemned is further developed in “I’m not like this, I’m not like this.” While visiting his disabled sister, the dutiful narrator befriends her elderly neighbor, a man who appears strikingly familiar but is ultimately unplaceable. It takes another family member to recognize the man as an infamous convicted murderer from years before. This man later confides in the narrator about his anxiety, only to self-interrupt by politely asking if he is being a bother. The narrator exits in a flurry of silent confusion; meanwhile violence and punishment, lodged so far in the past as to be almost prehistoric, obscure the tortured condition of this man’s soul. Resolution cannot be realized without first pinpointing the origin of conflict, and that is not within the remit of Askildsen’s fiction.

Despite the dark subject matter, the stories make for bracing reading due to Askildsen’s spare prose and the sly humor that arrives unexpectedly in the middle of a character’s downfall. One character’s bender is thus punctuated with a line such as “He drank, and it grew dark, and he got on well with himself,” and an old man at the park idly ponders, “If for some reason an airplane were to explode in the sky, I wouldn’t mind being one of the people—preferably the only one—who witnessed it.” Such rueful quips abound throughout this collection and lend a refreshing lightness to Askildsen’s bleak vision of the absurd.