A Surgery of a Star by Margarita Serafimova 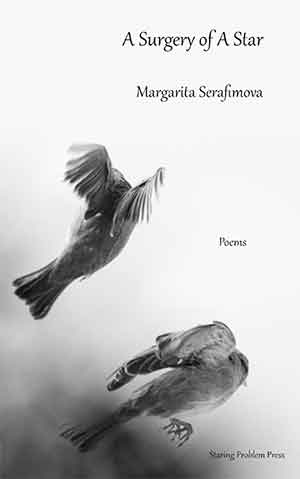 ONE BLINK. A snapshot taken. Time frozen in a few lines. Margarita Serafimova’s poetry captures a moment in time as perceived by the poet, revealing her bodily and mental experiences to readers in words that appear simple in their choice but create complex, thought-provoking scenes from that simplicity. A cursory glance at A Surgery of a Star, Serafimova’s latest chapbook, would lead readers to believe that they have stumbled upon a quick read; however, when reflecting upon the words, the sonority, and the overall style, deep meanings and affiliation arise through the common occurrences seized in each poem.

The stunning image adorning the covers of the chapbook (the negative of the front adorns the back cover) was taken by award-winning Bulgarian photographer Milen Neykov, who collaborated with Serafimova on the chapbook’s design. Playing on the duality that can be seen in many of the poems, the midflight birds, so close to touching, seem to pull away from one another violently in their ascent to the sky, echoing an image Serafimova evokes when she writes: “A fierce bird, your love / was poised in the air. / We were taking turns braving the gust” (“A fierce bird”). Like the pair of birds in the image, Serafimova explores the intense passion between two people throughout the collection. The above metaphor comparing birds to love exposes our natural instinct to fight against all odds and strong winds to come together and take flight. From the first glance at the cover page, the reader is launched into this impassioned experience found within the book’s pages.

Serafimova writes primarily in Bulgarian and self-translates her work into English with the aim of guarding the same lexical and poetic decisions across the two languages. In a recent interview with the author on Trafika Europe Radio’s Bowery Poetry Speaks, she mentions that language functions as a conveyor of emotions and ideas, using her poetic creations to transmit passion from the page to the reader. She states that the self-translation from Bulgarian to English (or the rarer English to Bulgarian) always requires a dictionary to try and grasp the original meaning and connotations of the original. For her, it’s all about the feeling and maintaining a fidelity to emotion rather than semantical meaning. The majority of the works in A Surgery of a Star were self-translated; however, it reads cohesively with no obvious markers showing the original English or translated poems. “Nestled in my words, quiet, inert / melding inside end with beginning, / congealing a rebirth / out of a circle” (“Nestled in my words”). While the translations themselves are rebirths of the original, the works maintain the original circular shape in the sense that they create a full, uninterrupted experience for the reader. The pieces frame the reciprocal relationship between poetic subjects and readers, forming a nest in which the mutual feeling becomes conveyed. She succeeds in rendering each piece into her nonnative language, impacting the reader with a soulfulness, emotion, sensuality, and passion settled in each line and phrase.

The stern sumptuousness of the image
of each one of us
in the eyes of the other—
a silver mirror
of the world of primary opulence.
(from “In Baghdad of the Mind”)

In traversing these poems, the reader enters Serafimova’s world full of intimacy and tenderness. She re-creates and etches a fleeting moment in words that extends beyond the personal, allowing readers to enter and identify with the described eroticism. The mirroring of the self in the other allows an out-of-body experience to become embodied as you watch yourself in the eye of the other in an exponential reflection of luxurious passion. Desire becomes an all-encompassing phenomenon in the sense that the struggle and indulgence of this sentiment create a sense of safety and mental calm. The moment hits us with an explosion, which in the above poem comes in the form of a stern sumptuousness; but once the explosion settles, we engage with the root of the feeling, ending in the world of primary opulence.