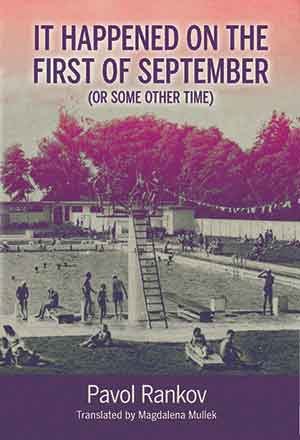 “PLEASE, YOU CAN’T look at everything through the lens of politics.” Such is the impassioned plea from our unwitting heroine in Slovak writer Pavol Rankov’s latest novel. Alas, despite Maria’s sentiments, September is primarily a political and historical novel of Czechoslovakia from 1938 to 1968. For each year, a four- or five-page vignette relays the historical facts of the country along with its storyline.

Intertwined throughout all the political upheaval are the lives of four young friends, each depicted to represent a different nationality within Czechoslovakia: Jan, a Czech; Gabriel is Jewish; Peter is from Hungary; and Maria, from Slovakia. There is a rather thin love story that runs through the text, but it works well as a continuing thread through regime changes during the thirty-year span.

Rankov, a prolific writer, captured the 2009 EU Prize for Literature for this work; in December 2020 he was awarded the Prix du Livre Européen. Surely, September is his masterwork to date. And no need to fact-check any details in this one (which is quite a feat in itself). Rankov is factually accurate on all accounts.

The book really swings into rhythm with the 1948 Soviet “liberation” of Czechoslovakia and the formal installation of communism (“social democracy” in Soviet-speak). The onset of communism and its ills such as limited freedoms, travel, speech, along with the terror of the secret police comprise the remainder of the story and its effects on the four friends.

All were required to work for the Communist Party. However, only Peter, strictly a party man, swallowed the Communist ideology and became an influential journalist. But as time goes by, he struggles with the meaning of it all and contemplates jumping ship. Maria especially held antipathy toward the party because they wrongly arrested and imprisoned her father as being a double agent in the war. Like all the other citizens in this police state, she learned to show a public face to authorities and then relax in the home setting.

Gabriel and Jan escape Czechoslovakia to another country only to return because of disillusionment with the politics of the new country. Maria tries to be the gentle voice of reason to the three men and encourages them to toe the line.

Nearing the story’s end, the toll of living the past thirty years under a totalitarian state shows plainly on their psyches. They learned to live their outer lives quietly, underground, long ago discovering that daily life under the regime was absurd.

September is not without humor. Rankov likes to poke fun at party brass. And no hints here as to which of the three men ends up as Maria’s spouse.

The translation is adequate, but September doesn’t read like a European novel, so loaded down with American slang and all.

Maria can close this one out: “It’s where we ended up. Not because of our own mistakes, because of politics. We weren’t able to live our own lives; we had to live the way we were told to.”