The Dangers of Smoking in Bed by Mariana Enriquez 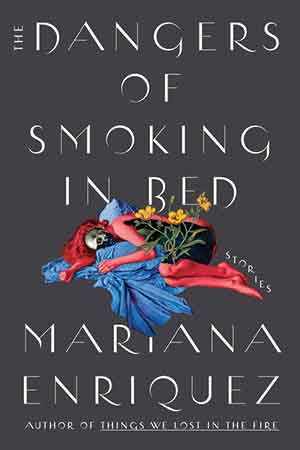 A DEAD BABY and her haunted great-niece open The Dangers of Smoking in Bed, Mariana Enriquez’s collection of disquieting short stories. In “Angelita Unearthed,” the eponymous infant wears its feet down to the “little white bones” as it follows the narrator into an irresolute ending. This introductory story portends the brutally macabre tone of the ensemble. Originally published in 2017, this new translation by Megan McDowell follows Enriquez’s lauded collection The Things We Lost in the Fire (2016, Eng. 2017).

Enriquez swathes her dozen stories in the viciously fantastical and grotesque, ensuring that her readers never settle: one encounters human excrement and blunt sexuality more than once. In each story, the ravages of poverty, misogyny, and the ghost of a government under dictatorship invade the private lives of teenage girls and young women. Through these characters, Enriquez develops the interpersonal effects of Argentina’s larger socioeconomic landscape. Mundane cruelty and selfishness infiltrate much of Dangers, particularly among the teenagers; the apathy that runs through stories about homelessness, mental illness, and wealth disparity is reconstructed as teenage disputes in “Our Lady of the Quarry” and “Back When We Talked to the Dead.” In “The Lookout,” a ghost in the guise of a young girl lures a depressed woman toward destruction.

Dangers’s stress on girls and women expertly draws the profound connection between supernaturally tinged horror and the violent degradation of a culture’s most vulnerable. Most demonstrably, the protagonist of “Kids Who Come Back,” the book’s longest story, professionally records the disappearance of children, mostly girls. When they return changed, the city’s populace is forced to contend with their missing in a stirring reflection of the thousands disappeared during Argentina’s dictatorship. While Enriquez asserts a sharp political edge in her collection, many stories simply revel in the gruesome and weird: “Where Are You, Dear Heart?” features a woman’s erotic fetish for heart palpitations, and “Meat” takes the obsessive fan of a musician to cannibalistic ends.

Each provocative tale elicits shudders and, often, repulsion. With The Dangers of Smoking in Bed, Enriquez carves a space for uncomfortable literature, proving its necessity to an examination of daily horrors.