We Know You Remember: A Novel by Tove Alsterdal 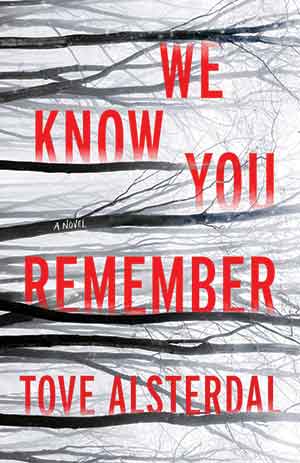 WE KNOW YOU REMEMBER is the second novel by Swedish writer Tove Alsterdal to be translated into English. Three other novels have been translated into Dutch, German, Italian, Spanish, Polish, and Greek, so perhaps more of her work will appear in English now that it has been read-tested.

Alsterdal’s first novel in English, The Forgotten Dead (2017), featured a New York set designer who travels to Europe in search of her missing husband. He was working on a story about undocumented immigrants in France. The wife doggedly pursues leads, making the missteps one expects of an amateur. Her resolve and stamina are tested repeatedly. Separate plot threads join for a rather unusual conclusion.

This new novel is a police procedural, set in the small town and rural geography of northern Sweden. On impulse, a middle-aged man stops by his homeplace, which he has not visited for over twenty years. He finds his father dead, murdered in the bath, the water still running. He is immediately detained until his movements on the day of the murder are confirmed. Although he is cleared, people remember that as a minor, he had confessed to a rape and murder. Once he is released, he takes up residence in the house, unsettling his neighbors.

Thus begins the slow process of an investigation without immediate leads. Featured is a midcareer policewoman, native to the area. The victim was reclusive, so initial interviews build a history of work and social acquaintances, rather than recent interactions. The son is kept in the picture by chapters that depict his point of view, as he lives in the house and takes walks to the lake where his crime supposedly occurred. He remembers pieces of what happened, which don’t quite accord with his earlier confession.

More crimes occur, and each solution opens up a new investigation. New admissions and discoveries uncomfortably point to the detective’s own friends and family. Alsterdal manages the chapter and plot momentum quite well, showing skills developed early on as a book editor.

Unlike many Scandinavian crime novelists, Tove Alsterdal is not concerned here with clever killers from the upper middle class. Nor does the novel target the political system or the police. The crimes involve folks in a declining but beautiful rural area, among the thoughtless young and those who will cover for them—remembering what they concealed.