Where the Wild Ladies Are by Aoko Matsuda 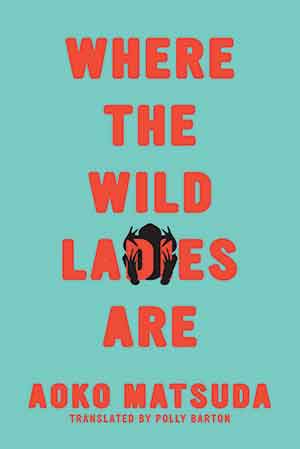 AOKO MATSUDA’S STORY cycle takes its title from the children’s story Where the Wild Things Are, the replacement of “Things” with “Ladies” alerting the reader to the text’s focus on gender as it retells Japanese ghost and yōkai tales, summaries of which are helpfully offered in an appendix. The ghosts of the characters’ ancestors haunt the pages and take the reader by surprise just as much as they do their family members.

The corporal and the spiritual commingle fluidly, the latter—mainly represented by a woman who has died by hanging, her body discovered by her son, Shigeru—offering lectures and comfort for the cousins who connect the stories. Another character shapeshifts between human and fox in order to survive living in a world that does not allow women freedom of movement and denies their feral nature, forcing the vulpine woman to have “the feeling that she was just pretending to be a regular woman” most of her life.

Many of the stories illustrate the struggles the cousins have reconciling their bodies with the gender norms enforced upon them by society, both feeling that they are already dancing on the edge of what is allowable in the physical world—perhaps giving them better access to a world beyond the corporal that demands women be hairless and men be stoic. After paying a technician to depilate her body, the unnamed narrator in the opening story, “Smartening Up,” is shown by her ghost auntie that hairless bodies lack power, leading the narrator to the early epiphany: “I want a skill, a special power into which I can throw my whole self. As to the question of what kind of creature I am, I really couldn’t care less. It doesn’t bother me if I stay a nameless monster.” The stories that follow tap deep into the cousins’ inner tensions as they question what kind of “creatures” they are.

Overall, these contemporary retellings of traditional ghost stories illustrate that the anxieties such stories uncover are timeless, and such tales are a fitting tool for exploring contemporary constrictions placed on people in their corporeal existences.