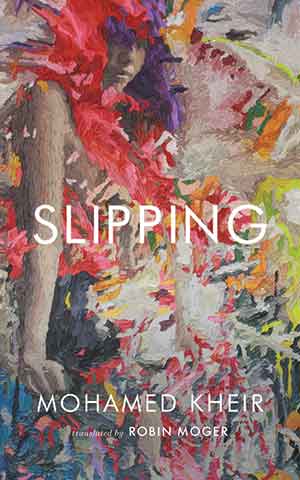 SLIPPING IS THE FOURTH novel by Mohamed Kheir, the prolific Egyptian poet, novelist, and journalist, as well as the first of his novels to be translated into English. Set amid the Arab Spring and its aftermath, Slipping navigates the complicated intricacies of the human psyche regarding dreams, reality, and the fictions they create. Slipping starts off rather disorienting for the reader, a beginning that quickly slips into a commentary on the fractured lived experiences of various people disillusioned by the dreams and lost promises of the Arab Spring. While the revolution permeates the consciousness of the various characters within the novel, it is never mentioned by name. Instead, the reader must rely on each of the various characters who have invested their lives in chasing fantasies that never come to fruition.

Though Egyptian critics have celebrated its poetic form, rightly so, what makes the novel stand out are its myriad characters and Kheir’s ability to weave connections between each while incorporating elements of the supernatural that feel tangible and realistic to the reader. True to the title of the novel, each chapter slips in and out of focus, touching on some thematic aspect of the imperfect human condition and how loss shapes and reshapes reality. In this manner, the novel juxtaposes its two protagonists’ lives—the journalist, Seif, searching for the next editorial scoop and his self-exiled guide, Bahr—while moving back and forth between the past and the present.

As Bahr gives Seif a tour of Egypt’s mythical back allies and its hidden underground cultures, he recounts his life beginning with a harrowing childhood experience that forces him to live a life without a home to call his own. As each chapter unfolds, and each of the various characters come into focus with their own fantastical stories, Bahr narrates his life to Seif who, in turn, is forced to reconcile his own past traumas that begin and end with the Arab Spring and his “lost” lover, Ayla.

A carefully crafted love poem and a commentary on the fragileness of post–Arab Spring dreaming, Slipping leaves the reader questioning reality while showing fiction’s ability to trap the dreamer within their own fantasies.