Out of the Cage by Fernanda García Lao 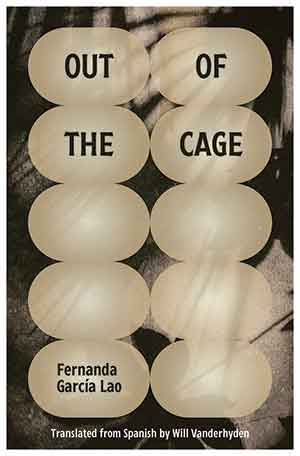 IT IS ALWAYS cause for excitement and anticipation when a foreign writer is translated, into any language, but especially into English, where the number of translated books is woefully low. Those emotions are heightened when the translator is one whose work you admire. This is the case with Argentine author Fernanda García Lao’s Out of the Cage, translated by Will Vanderhyden.

Writing in the newspaper Página/12, Silvina Friera called García Lao “Argentine literature’s strangest writer,” adding, “No one narrates the absurd like her. There’d never been, there is no one now, and there will never be anyone like her.” As you will see, this is in no way an exaggeration.

The novel begins: “The day of my death everyone was there. Winter had paused and spun on itself like a tornado. It was a national holiday, I don’t remember which one, but we were exultant. [. . .] Somehow, an LP, careening through the air like a demented boomerang, had severed my jugular. And I didn’t understand who or what had thrown it. Maybe the bloody poetics of the line had become embodied in my throat. [. . .] My death was so unexpected and exquisite that, for a moment, nobody noticed it. Not even me.”

What follows is a bizarre family saga, narrated in first person by the disembodied (corporeal representation is central to the novel) Aurora Berro (more about her name later). García Lao’s prose is unpresuming; one might even say boring. The sentences are repetitively linear: often containing little more than a subject and predicate. There is no excess. The novel’s excess lies elsewhere: in its absurd, at times contrived, conceits (a protagonist-narrator named Aurora who is killed by a flying LP while her family sings a hymn to the Argentine flag, which, not coincidentally, is known as “Aurora”); grotesque characters that border on the ridiculous (a bicephalic child named Manfredo); and absurdist plot lines (a husband who engineers a sex robot to look like Lana Turner).

On the surface, Out of the Cage (in the same interview with Página/12, the author declares that “it’s necessary to free oneself from physical and mental cages,” hence the novel’s title) is the story of a family and a menagerie of sideshowesque characters; it can also be read as an allegory of mid-twentieth-century Argentine political history, revolving around three key years, which also provide the novel’s structure.

The first section, titled “Aurora, 1956,” the year in which Aurora dies, is the year following the military coup that ousted Perón from power, leading to the enactment of a decree-law that banned “affirmation of Peronism.” The second section, “Norma, 1975”—which consists of a single letter in which a former model/prostitute with a “polio leg” attempts to extort the Colonel, Aurora’s widowed husband, and which also functions a transition between the first and second sections—is the year in which President Isabel Perón, under pressure (extortion?) from the military, appointed Jorge Rafael Videla commander-in-chief of the Argentine Army, an act that initiated the campaign of terror against Argentine citizens that would become known as the Dirty War. In the third section, “Severino, 1989”—which corresponds to a year of country-wide riots in Argentina—Severino, the illegitimate son of Norma and the Colonel, or perhaps his conjoined son Manfredo, replaces Aurora as the narrator-protagonist, who drives the novel toward its macabre end.

Out of the Cage is García Lao’s English-language debut, and it could have found no better translator than Will Vanderhyden, who is, in my opinion, one of the best translators working in Latin American fiction today. His translations are always clean, honest, measured, and faithful, an oft-hated and maligned concept that many translators have banished from their vocabulary. By faithful, I mean that Vanderhyden honors not just the meaning, but equally important, the style of the original text. In short, he does what the text requires, rarely imposing himself. This is not to say that he is invisible. On the contrary, the decision to leave words such as hipertensas [hypertensives] and deformes [deformed ones] in Spanish and italicized, along with additions such as “careening through the air,” which does not appear in the original, and the somewhat anachronistic use of “turntable” for the Spanish “tocadiscos” [record player], all mark the presence of a translator. These examples, however, are exceptions. Out of the Cage is the first novel by a female author Vanderhyden has translated.

In 2011, at the Guadalajara International Book Fair, García Lao was named “one of the best kept secrets of Latin American Literature.” With the publication of Out of the Cage that is longer be the case. Vanderhyden, who has a penchant for translating multiple novels by the same author, is currently translating García Lao’s Nación vacuna [Vaccine nation]. My guess is another will follow. I have no doubt they’ll find a home.

Postscript: In the section labeled “Norma, 1975,” we read: “It seems that in writing, you discover yourself, even if what comes out is ugly. The excavation of ideas is ugly.” One cannot help but believe that the author is speaking vicariously through her character. What is certain is that these sentences will serve as an epigraph for novels going forward.