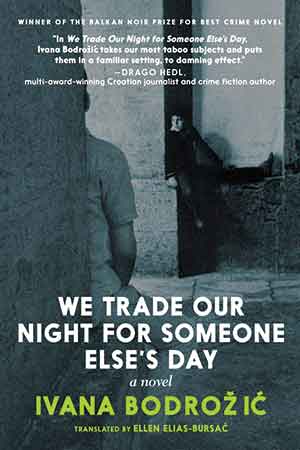 IN HER NATIVE Croatia, Ivana Bodrožić is controversial. While internally displaced as a nine-year-old at the beginning of the civil war, whose father disappeared fighting for Croatian independence from Yugoslavia, she is cynical about the political and cultural legacy of the 1990s conflict. We Trade Our Night for Someone Else’s Day caused an uproar when it was published in 2016; in the novel, Bodrožić questions every foundational element of the Croatian postwar rhetoric, politics, and institutions that are rooted in war heroism but are actually driven by corruption, bribery, and self-interest. Even more daringly, she suggests that contemporary Croatian issues are self-generated. Her criticism is sweeping, touching religion, nationalism, education, and gender politics, written in a fast-paced, narration-dominant journalistic style: “The war was actually a shiny, radiant point people kept returning to; they hadn’t moved on from what they still saw as a time of pride and glory. The aggression, the destruction, and devastation continued, only now it was not about defending the country. Two decades after the war, damaging behavior was still being honored, exacted, treated as if it were holy.”

Many of Bodrožić’s negative characters are almost exact replicas of public figures engaged in political scandals whose careers benefited from the war, easily identifiable to the Croatian reader, and consequently blurring the line between the fictional and factional. The main character’s background is reminiscent of the author’s, and although the location is not specified in the novel, it is easily recognizable as Vukovar, Bodrožić’s hometown. Vukovar is one of the most eastern Croatian cities, located on the Danube and the border with Serbia, and as such was a site of horrendous battles and violence during the ethnic war. Even nowadays, the school system is segregated into Croatian and Serbian, and schoolyards are literally separated by fences.

In the novel, the young journalist Nora returns to her birthplace after years of living in the capital. Her assignment is to write a light piece about a bizarre passion crime: a Croatian high school teacher who killed her husband after falling in love with her Serbian student. However, Nora also attempts to learn more about her father’s disappearance and reintegrate herself in the city. As an obvious outsider in a closely knit community, Nora runs into a series of problems and discovers political scheming that crosses allegedly clearly delineated ethnic lines. In the process, she befriends a taxi driver, an ethnic Serb of her own age, and although a mutual understanding is immediate, a happy ending is unlikely because of their backgrounds. While critical of the older generations who participated in the war, Bodrožić is extremely pessimistic about the future of the younger ones.

Ellen Elias-Bursać’s translation is excellent as always, accompanied by an insightful translator’s note that is a short but effective historical contextualization for American readers who might not initially recognize the novel’s significance. Presumably for the same reason, the original title of the novel is changed from Hole to We Trade Our Night for Someone Else’s Day, a lyric by Ekatarina Velika, a hugely popular but dissolved Serbian-based rock band whose song titles Bodrožić uses as chapter headings.