Above Us the Milky Way: An Illuminated Alphabet by Fowzia Karimi 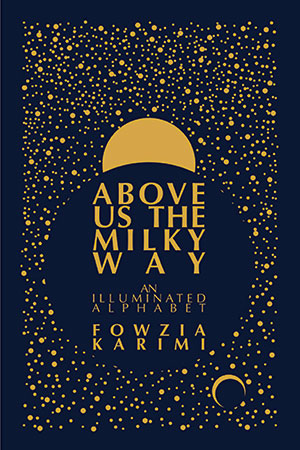 FOWZIA KARIMI’S Above Us the Milky Way is a complex mix of memory and fiction, telling the story of the dead, the living, and the effects of war. As Karimi recounts her family’s emigration from Afghanistan to the United States during the Soviet army’s invasion, she weaves together her own memories and the stories of others, creating a narrative that is not the story of one but of many.

Karimi examines the structure of a narrative and plays with the idea that all words in the English language come from only twenty-six letters. She divides her story with these letters, creating a central idea for each chapter. However, much like how the alphabet can be rearranged and understood in different ways, so can Karimi’s childhood. The stories woven through the book are not in the order they happened but in an order that helps the reader understand how the events impacted Karimi. As she explains, “What I tell you is not the story of my childhood as it occurred neatly, chronologically, but of my childhood as I experienced it internally.”

The book’s characters are the mother, the father, and the five sisters. Sometimes the sisters become a single character with one consciousness, and other times they are five fingers on the same hand, separate but connected by shared experience. The stories in the book are Karimi’s own experiences as well as the stories of her sisters, parents, family friends, and strangers and are combined with fairy tales and ghost stories, creating a mix of truth, embellishment, and plain fiction. “Their stories were somehow my own, or rather, mine was theirs repeated,” Karimi writes. “I knew the roads they had traveled; I had traveled them too.”

Throughout the narrative, Karimi focuses on the duality of life as she describes not only her life in the new land but also an imagined one in the first land. While the family left the war-torn land, a part of them remained and continued to mourn the loss of what they once had, a costly effect of war. Karimi characterizes this divide throughout the book, calling the sisters “human chimera” and describing how “a sister could laugh at a cartoon playing on the television and recite the prayers for the dead, the disappeared, and the imprisoned with the same mouth.” Instead of there being a definite before and after, the sisters’ lives become a complicated mix of both.

Karimi’s lyrical prose creates this feeling of timelessness, of things beginning and ending and unfolding. The segments of the story can feel unconnected and disjointed but ultimately move the reader to a greater understanding of the story. Scattered through the novel are pictures of Karimi’s family and childhood as well as small drawings that help illustrate aspects of the story, from a pile of confetti to a severed finger.

One of these drawings, a headless corpse, serves to drive home the passages around it, about the senseless violence of war, a recurring element of the book. War is depicted through the eyes of children who cannot comprehend and yet somehow simultaneously understand it perfectly. The book describes the indiscriminate violence of bombs and missiles and examines the paranoia brought on by not knowing who is a friend and who is an enemy.

The book has no straightforward plot, no rising action or dramatic twist; instead, it is a relentless march forward. The book becomes a joyous tribute to love and family, and it symbolizes a funeral procession for those lost. But it never stops moving. As Karimi repeats throughout the book, “the only way forward is through the alphabet.”

Karimi often speaks directly to the reader and attempts to demonstrate how the structure of the story works. She invites the reader to enter and exit, to take whatever they can or want to take from the story. She describes it as a kaleidoscope, as “movable type—immovable in their mission,” or as a home for the dead. However, she makes it clear what the story is not: “If you seek biography, look elsewhere. It is a dream I offer you.”

Above Us the Milky Way is a story of immeasurable tragedy but also of hope and acceptance. The book works to define what home is and looks for answers to questions about the human experience. It is a book of introspection rather than retrospection, encouraging readers to follow its example and look inward at their own lives.