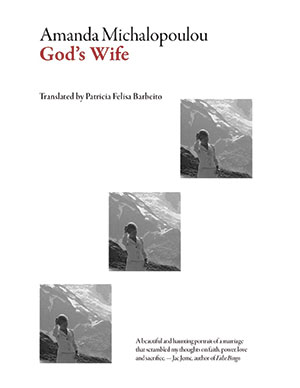 THE TITLE OF Amanda Michalopoulou’s recent book, God’s Wife, is not deceiving. The novel is about God’s wife, the unnamed narrator who lives, converses, and dines with God. Exquisitely inventive, the novel explores the life not of a pious woman but of an inquisitive, female spirit caught in the web of her creator. In this novel, Michalopoulou marvelously stretches the boundaries of fiction, toying with fiction’s possibilities and impossibilities and thrusting the reader into a curious exploration of both the world and the self.

The narrative is delivered by the protagonist herself who resolves to share her experience. She was raised by her religious aunt after her parents died in a car accident. On a terribly rainy day, tied to a tree by her playful yet torturous brother, she is snatched from the earthly world; at around eighteen, she is chosen to become God’s platonic partner. It is this afterlife with God that she recounts in her written soliloquy, an internal monologue of sorts. “I do not know how else to put it,” she writes, “but I feel like an imaginary woman who took a plunge into the sea of eternity and now doesn’t remember how to pull herself back onto the firm shore of the present. At times I ask myself: Am I really real?” The novel is divided into three main chapters, evoking Dante’s Divine Comedy: Inferno, Purgatory, Paradiso. In “Inferno,” the heroine is sadistically attached to matters of the flesh as she tries to adapt to God’s environment; in “Purgatory,” she and God visit the real world; and “Paradiso” features their return to heaven.

The protagonist’s relationship with God is intriguingly complex. She and God quarrel like a typical married couple, debate like master and disciple, and argue like patient and doctor who disagree on a cure. Among the most frequent topics of their disagreement is the role of literature and its relation to the human condition. Despite God possessing the most magnificent library, he owns no fiction because he despises literature, reducing it to the Platonic outlook of fabrication, a detachment from the real. “‘I don’t understand why they need to invent things that don’t exist,’ He says,” whereupon the narrator wonders, “I am baffled: Isn’t that exactly what He did?” The novel curiously weaves into its fabric the ubiquitous postmodern theme of equating author with God. Throughout the narrative, Michalopoulou displays her literary influences by interjecting references to an array of texts and interlocking various disciplines, thereby affirming the place of fiction in the realm of intellectual discourse.

The novel is a brilliant work of art. Its simple structure and minimalist plot illuminate its explorative ideas and its profound engagement with abstract intellectual content. At the heart of it lie a philosophical rumination, an existential crisis of the self, a sociological exploration of gender roles, spiritual and religious angst, and literary contemplation on the relationship between life and fiction. Michalopoulou’s language is refined, inviting in its details, and pensive in its articulation, all qualities richly maintained in Barbeito’s outstanding translation. Austere yet poetic images quiver along the protagonist’s wistful voice to create a world that constantly wavers between the quasireal and the ethereal.

Michalopoulou is the author of eight novels, three short-story collections, and numerous essays written in Greek. Many of her literary works have been translated into twenty other languages. She is also the recipient of numerous prestigious awards and literary grants worldwide. God’s Wife is her third novel appearing in English.