Death in Her Hands by Ottessa Moshfegh 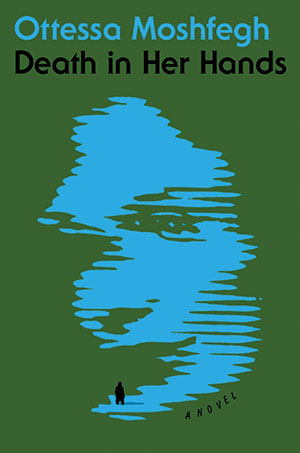 OTTESSA MOSHFESGH’S women do not assimilate. Whether the eponymous protagonist and her scatological fascinations in Eileen or the narrator of My Year of Rest and Relaxation who medicates herself into a yearlong sleep, Moshfegh’s protagonists are fractures in the veneer of social sanity. These women are tenants of varying states of suspension. A character mishears Vesta Gul’s name as “vestibule,” which in the grand scheme of things is no accident. These characters oscillate between the lives they aspire to live and the ones they actually inhabit, unable or unready to drop anchor on either side.

Seventy-six-year-old Vesta lives with her dog and her husband’s ashes in an urn in a lakeside cabin. Walking in the birch woods, she finds a note with “Her name was Magda. Nobody will ever know who killed her. It wasn’t me. Here is her dead body” nondescriptly inscribed on it. But Vesta has a taste for the literary; instead of informing the police, she decides to write Magda’s story. “What a strange responsibility it was, to hold someone’s death in your hands,” she remarks as she sets about inventing lives for those who never lived, spiraling into a quagmire where she gradually becomes unable to separate her life from her art. “Were you still dreaming? Was I?” she asks. Often there is no answer. Predicated on a whodunit, Death in Her Hands is anything but boilerplate. This murder mystery is interested in neither the murder nor the mystery; instead, it is an incision into the vagaries of vague lives.

Less provocative than Moshfegh’s other works, Death in Her Hands is an involved meditation on the intimacy between life, art, and death. In the process of embellishing Magda’s fiction, Vesta’s own privations are denuded. She shatters her constructed marital idyll, revealing her dead husband as a controlling megalomaniac, given to cruel condescension and predatory engagements with his young assistants. The literary pursuit of this suburban New England septuagenarian widow becomes a channel for the undulations of her unquiet mind, an attempt to preserve the passing of her ungrieved life. “That was what I meant to write all along–my story, my last lines. My name was Vesta,” she writes, eerily replacing Magda’s name with her own.

Written and shelved in 2015, the novel emerges from the drawer at a time when isolation is the mechanism of daily affairs, uncannily reflected in the distanced and misanthropic Vesta who is steeped in several layers of self-imposed isolation. Death in Her Hands is not a book of answers; reading it in the midst of social loneliness generates great excitement but little comfort. Typical of Moshfegh’s novels, this one is just as unpredictable and sparks in its readers a confused curiosity as it hiccups along a hallucinatory trail.

Vesta wants to insist on life, and for a while the novel pretends to share her insistence. But it resolutely refuses to allow her any safe harbor, which is perhaps its most brutal inclination. She is betrayed by her two companions (her husband and her dog); the narrative strongly hints that the note—the fount of Vesta’s artistic obsession—is only a prop from a detective game her dying neighbor is playing. “Don’t you know there is no life after death?” she is asked, puncturing the aorta of her literary memorialization. Moshfegh toys with the possibility of suggesting art as an antidote to death and oblivion; after all, Vesta is given a book to aid her in her mourning. But this life buoy is quickly yanked away the moment we get too comfortable in the safety of that idea. Cruelty is Moshfegh’s sleight of hand.