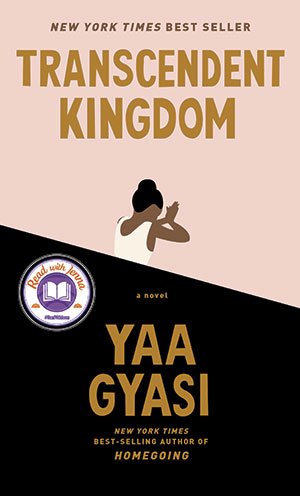 Gifty is the youngest daughter of an immigrant Ghanaian family. Unlike her parents and her older brother, Nana, she is born in Huntsville, Alabama. Shortly after Nana’s birth, their mother decides that she wants to give him the world and enters a lottery to go to America. She is, however, ill-prepared for the world of Alabama.

The family joins an all-white evangelical church because the mother reasons that the God in Ghana is the same God in Alabama. Nana becomes a star athlete in high school, and Gifty the model immigrant student, if not repressed religiously. She studies to become a neuroscientist, searching for answers to why addiction occurs, or “How does an animal restrain itself from pursuing a reward, especially when there is risk involved?” The father, Chin-Chin Man, finds America dispiriting and leaves under the pretext of visiting his brother in Ghana and never returns.

Gyasi’s lyrical language is an achievement. At every stage of Gifty’s development, her narration is appropriate: at times naïve and in others scientific. Of her mother’s depression, Gifty writes, she “colonized that bed like a virus.” Of her brother’s adolescent demeanor in the face of racism, she describes the lie of masculinity, the “faux tough looks of young boys.” And of wearing Ghanaian traditional dress, she writes: “I thought it would seem a lie. I felt about as Ghanaian as apple pie.” Gyasi echoes many African writers as she reflects on her mother’s deportment while speaking Fante (she’s girlish), Twi (she’s authoritative), and English (she’s meek). The genius of the work rests with the use of language to develop characters.

The novel establishes Gyasi as a masterful storyteller. Her narrative style weaves seamlessly in and out of time and space. Her characters are memorable. Her ability to communicate science in lay terms and her observations on institutional racism make this work worth the read. In short, it is a gripping story.