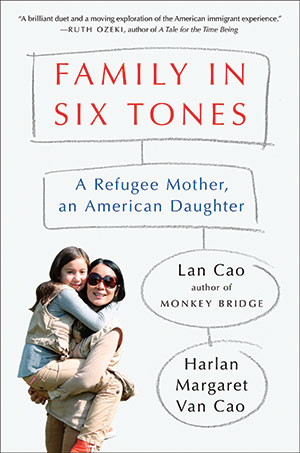 “MY AMERICAN LIFE  started with loss.” With that sentence, Lan Cao opens this memoir told in alternating narratives with her daughter, Harlan Margaret Van Cao. Aged thirteen in 1975, Lan Cao fled Saigon during the last days of the Vietnam conflict to stay with family friends in Connecticut. Eventually, her parents followed and settled in Falls Church, Virginia, where she attended high school, then went on to Mt. Holyoke College and Yale Law School. Today, she is an endowed professor of international economic law at Chapman University School of Law in Los Angeles. An immigrant success story, the American Dream come true? On the surface, perhaps, yet in this compelling memoir, Cao and her daughter, born in 2002, break that surface as they explore the nature of loss and what it means to reach beyond a hyphenated identity.

Cao sees and adamantly presents herself not as an immigrant but as a refugee, a critical distinction. In fact, the book’s genesis was in a StoryCorps piece that Cao and Van Cao wrote on the fiftieth anniversary of the Tet Offensive. The different yet intertwined perspectives of mother and daughter led to a proposal for a joint writing project. Under somewhat gentle editorial supervision, the two wrote separate chapters without consulting each other, a process that not surprisingly often amplified the usual tumult of mothers and teenage daughters. Add to this process the passion and candor of an extroverted teenage girl and the intellectual introvert’s need for privacy, and it’s remarkable that the book ever made it to press. Also, during the writing, Cao lost her husband, William Van Alstyne, a brilliant constitutional law scholar and Van Cao’s loving father.

No wonder, then, that honesty and courage are the most striking qualities of this memoir. What it means to be an American, the “American Daughter” of “a Refugee Mother,” as the book’s subtitle describes, is the shared lens of the two in terms of identity: the mother reflecting, the daughter searching. Monkey Bridge, the novel Cao wrote in 1997, was semi-autobiographical, yet fiction does not require memoir’s degree of exposure. As a result, the mother and daughter did not always agree on the appropriate level of revelation. Cao writes publicly for the first time of her “shadow selves,” the “double consciousness” that often accompanies trauma. Van Cao’s dramatic and moving descriptions of her encounters with this tormented part of her mother illuminate Cao’s recognition: “Sometimes the stories that need to be told are the hardest ones to tell.”

Such momentous subjects—the role of memory, generational trauma, displacement—are interrogated throughout Family in Six Tones, yet there are moments of humorous insight, especially when it comes to parenting. Raised in a traditional Vietnamese family and as a refugee, Cao had certain expectations that her American daughter often challenged, even defied. The mother admits that she has lived her life as a kind of self-defense with education as her bulwark; her spirited daughter has her own view: “Instead of being thankful that she has not passed down her refugee anxieties to her child, she is anxious that I am not anxious.”

By her mother’s design, Van Cao is not hyphenated, yet she writes with profound appreciation of her Vietnamese American community, her two visits to Vietnam, and her desire to spend more time there. Not completely bilingual, she speaks Vietnamese, though she says she struggles with all six tones of the language, the allusion in the memoir’s title. And that is one of the pleasures of Family in Six Tones: it is “to be continued.” Being drawn into the process means sharing the courage of these two voices to break silence and celebrate a hard-won, authentic bond. It means acknowledging that the prism of perspective may show the indeterminacy of “truth” while affirming universal truths. When Lan Cao writes that she is “a refugee who lost a country and . . . a mother whose love is vaster than even the vast parameters of loss,” it’s clear that her daughter understands.