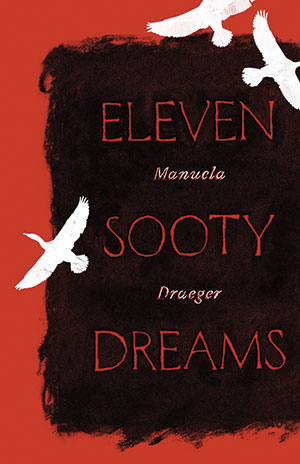 ELEVEN SOOTY DREAMS is the latest book out in English by one of Antoine Volodine’s postexotic heteronyms, Manuela Draeger (see WLT, Autumn 2020, 22). Draeger, whose name is on several books for adolescents and whose first book in English, In the Time of the Blue Ball, was published in 2011, now brings us a story about a group of young people trapped in a burning building during a protest and reliving their memories just before the flames and death consume them. Like Volodine’s other imaginary writers of the postexotic (by which Volodine means “beyond genre categories”), Draeger explores the power of dreams, the potential landscape of the afterlife, and a surreal world populated by characters who can transform, live forever, and alter their states of consciousness.

Each of Draeger’s “sooty dreams” depicts a different person’s (or elephant’s!) memories or experiences moving through the Bardo (or afterlife). Granny Holgode, who seems to grow younger as time passes, acts as the unofficial leader of a group of ragged adults and children clinging to the Bolshevik beliefs of the defunct Second Soviet Union. Like Gramma Udgul in Volodine’s Radiant Terminus, Granny Holgode somehow defies time and lectures her listeners on the glory of the revolution with a kind of mesmerizing force. But while Gramma Udgul lives under the cloud of the Second Soviet Union’s recent collapse, Granny Holgode presides over the ruins of long ago. For Marta Ashkarot, death means turning into a talking elephant who undergoes reincarnation multiple times. Children like Imayo Özbeg and Rita Mirvrakis form a powerful bond of love and mutual support, even in the face of loss, death, destruction, and genocide. At one point, as they wander the streets looking for a long-lost relative, Rita cautions, “It’s better not to believe in the present.”

In other “dreams,” a corpse speaks to his sister from the wire fence upon which he was impaled, and an insane soldier takes over teaching school each time the regular teacher is shot for not toeing the party line. Characters wander around the ruins of their city wearing boards around their necks that exhort strangers to kill or dissect them because they’re sub/inhuman.

After death, the voices Draeger has summoned up are transformed into what Granny Holgode calls “strange cormorants” (as she’d told the children, “perishing in fire during combat opens the door to an immediate metamorphosis” into one of these creatures). From the “sooty heap” created out of the bodies consumed by fire emerges one voice—Imago Özbeg’s—to point the way forward to the next incarnation.