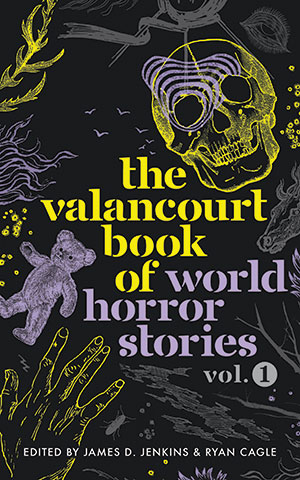 TODAY YOU CAN watch horror films from just about everywhere. We are truly living in a golden age of horror films, not only in terms of global availability but also of artistic quality and thematic versatility. Horror fiction, however, is another story entirely. The US market rules the anglophone horror world and is almost entirely white, with a few authors like Stephen Graham Jones, Victor LaValle, or Gabino Iglesias accumulating a respected but still small readership. Though scholarship has recovered a great deal with regard to the gothic in German, French, Italian, and Spanish literature (mostly in the period prior to World War II), and some anthologies like the VanderMeers’ thousand-page The Weird (2012) have collected a wider view of the genre, what’s going on in horror outside the anglophone world is virtually unknown to English monolinguals. Volume 1 of The Valancourt Book of World Horror Stories changes that.

Founded by James D. Jenkins and Ryan Cagle in 2005, Valancourt has won accolades among horror readers for bringing hundreds of long out-of-print gothic and horror novels into affordable, sleek new editions. Among their regular publications are annual anthology series like The Valancourt Book of Horror Stories or, more niche, The Valancourt Book of Victorian Christmas Ghost Stories. Now, in recognition of the massive trove of nonanglophone horror fiction available just out of reach to so many readers, Jenkins and Cagle have pulled together a type of anthology that collects and translates twenty-one contemporary horror stories originally published in Spanish, French, Dutch, Italian, Romanian, Swedish, Finnish, Catalan, Norwegian, Afrikaans, and Hungarian by writers who are regarded as leading the genre’s edge in their respective countries (only Spain is represented more than once).

From the collection’s first story, Italian author Luigi Musolino’s “Uironda” (a story about a divorced trucker reminiscent of the best culture-critical writing of Stephen King and the most nihilistic impulses of Thomas Ligotti), to the last, late Spanish author José María Latorre’s “Snapshot” (a macabre but humorous story of a man obsessed with snapping shots of himself in a photo booth, revealing the grim truth of what he is), The Valancourt Book of World Horror Stories is a grand guignol of horrific oddities from across the world, representing as many subgeneric impulses and terrifying plays with the genre’s possibilities as there are stories. Of particular interest and terrifying conclusion are Attila Veres’s “The Time Remaining” (Hungary), Flore Hazoumé’s “Menopause” (Ivory Coast), Marko Hautala’s “Pale Toes” (Finland), and Yvette Tan’s “All the Birds” (Philippines). Lars Ahn’s “The Collection” (Denmark), about a couple who discover they’ll do anything to prove they are right for each other, is probably my favorite of the bunch. But the range of stories presented suggests no one will be without something to love.

Many of these stories are translated by Jenkins and Cagle themselves, a remarkable feat, and particular attention was paid in the anthologizing process to diversity of gender, nation, race, and colonial subjectivity. The stories come from Europe, Latin America, Asia, and Africa, some from minority languages like Catalan, and all are interested at some level in power disparities (poor/rich, men/women, colonizer/colonized). Jenkins and Cagle have promised a second volume of The Valancourt Book of World Horror Stories, and I can only hope that future anthologies in the series continue the quality of terrifying tales presented while also giving us a better look at the world of horror in Asia, Africa, and eastern Europe.