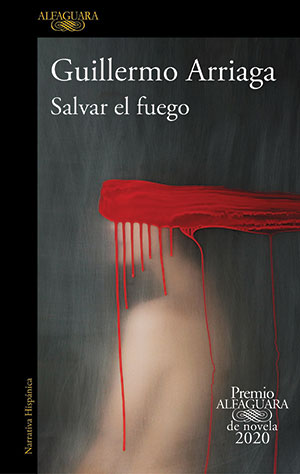 GUILLERMO ARRIAGA’S Salvar el fuego has garnered him the prestigious Alfaguara Novel Prize for 2020. A major figure in Mexican cinema, Arriaga is an internationally recognized screenwriter, director, and producer. Salvar el fuego, his most ambitious fiction, contains many of the themes as well as the narrative techniques that characterize both his films and previous novels.

Salvar el fuego has four main characters: Marina Longines, a wealthy and ostensibly happily married woman with three children who is a choreographer and owns her own dance company; José Cuauhtémoc Huiztlic, a man imprisoned for killing his father, who was a distinguished indigenous scholar; Francisco Cuitláhuac Huiztlic, José’s brother; and El Máquinas, an elite hitman for a drug cartel, whom José meets in prison when he is serving a sentence for killing his father. Once he has done his time, José looks up his prison buddy who, when José becomes hospitalized with serious infections from insect bites, gets his cartel boss to pay for his treatment. This act precipitates events that lead to José killing of a young hired assassin and a police commandant, actions that earn him a trip back to prison with a fifty-year sentence. Marina is close to a wealthy gay couple, Pedro and Hector, who are patrons of the arts. They sponsor cultural events and literary workshops at the prison where José is serving his sentence. They invite Marina to have her company present their work there, where she meets and falls in love with José, something that rips her from her comfortable upper-class life and stable marriage and threatens her existence.

Through these characters, the novel lays bare the gulf that exists in Mexico between the wealthy and poor and the lack of justice and opportunities for the latter. At the beginning of the novel, José describes Mexico as a nation divided between the haves, who live in fear they will lose everything they have, and the have-nots, who live in rage for what they do not have. The scourges of political corruption, machismo, and the violence fueled by the drug trade also receive treatment in the novel.

In Salvar el fuego, Arriaga employs the narrative techniques of hyperlink cinema he has exploited in his previous fictional and cinematic works, including the use of several alternating narrative voices with flashbacks and flashforwards. Marina Longines, the novel’s most developed character, tells her story in first person. Francisco, José’s brother, also speaks in first person, primarily addressing his dead father. Another strand of the story is narrated in third person. These voices, which initially seem independent of one another, gradually come together at the end of the novel. In addition, writings by José and other prisoners are interspersed throughout the book. This narrative structure creates a high level of suspense, which helps maintain reader interest in the storylines right up to the novel’s surprise ending.

Arriaga’s work explores dark and absurd aspects of reality with compelling realism. Much of the action of this novel takes place in the Reclusorio Oriente, a large prison in Mexico City, and his depiction of life there is quite convincing. Despite the crude elements and violence in Salvar el fuego, Arriaga’s skill as a narrator, along with his play with language, use of regional dialects, and originality of expression, make it a captivating albeit disturbing read.