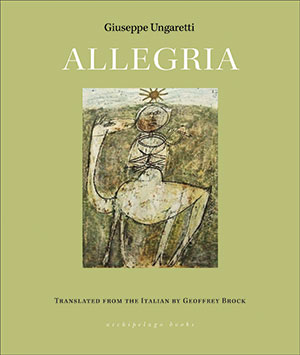 THE ITALIAN WORD allegria does not have a true equivalent in English, which makes Allegria a sensible choice for the title of this translation. Moreover, Allegria subtly fuses Allegria di naufragi (1919) and L’Allegria (1931), which are the titles of two early manifestations of the book that originated in Il porto sepolto in 1916 and was repeatedly revised until 1969, the year before Ungaretti’s death. Although selections from it appeared in half a dozen English-language editions of Ungaretti’s poetry (Allen Mandelbaum, 1958 and 1975; Patrick Creagh, 1971; Charles Tomlinson, 1983; Kevin Hart, 1990; Diego Bastianutti, 1997; and Andrew Frisardi, 2002), Geoffrey Brock’s is the first complete translation of the 1931 edition, “Ungaretti’s first full-length volume of poetry and a seminal work of Italian modernism.”

In a brief and informative section of “Afterthoughts,” Brock explains that “its title is most often rendered as Joy, though tin-eared dictionaries may prefer merriment, gaiety, or mirth.” Joy is indeed Brock’s choice, as it was Mandelbaum’s and Frisardi’s before him (while Creagh and Bastianutti refer to the collection by its Italian title but do not translate the poem “Allegria di naufragi”). It is also the best if not the only choice, even though allegria is more distinctly an external manifestation of an inner feeling, and one which may involve and unite multiple individuals (as in the case of a shipwreck). Plus, the orthographic similarity between allegria and allegoria suggests “Allegory of Shipwrecks” as a plausible and, indeed, fascinating alternative for the title of both the poem and the eponymous 1919 collection.

Written between 1914 and 1919, during Ungaretti’s active service on the Italian and the western fronts, most of these poems burn like sparks of emotion, flashes of understanding, splinters of insight. However, despite their diaristic form, intensified by the horrors of war in the trenches, there is nothing fragmentary or unfinished about them; on the contrary, they aim to represent the totality of experience in the infinite and fathomless details of its unfolding, and they are carved and polished like the Karst Plateau on which they were originally crafted.

As an editor and translator of Italian poetry who is also a poet in his own right, Brock is uniquely qualified to meet the challenges presented by one of the most difficult poets to render in any language. For the most part his versions improve upon those of his predecessors (except perhaps Frisardi), keeping close to the text, avoiding the pitfalls of interpretation, and generally striving for a middle ground between faithfulness and clarity. Occasionally, one feels that he could have cut closer to the bone of Ungaretti’s compact and parched poetic diction, instead of domesticating the text both syntactically and lexically, and making it “friendlier” to the anglophone reader than it is to an Italian. But if the latter may ask, cynically, “Why bother translating at all?” (Ungaretti or, for that matter, any other poet), the former will be grateful to Brock for a version that outlines and occasionally transcends the limits of what translation can do.

Editorial note: While our mandate is focused on literature written in the twenty-first century, I couldn’t pass up this opportunity to have Ungaretti’s first collection, published in its entirety for the first time and sporting a fresh English translation, reviewed to celebrate the fiftieth anniversary of the poet winning the inaugural Neustadt Prize in 1970. – Rob Vollmar