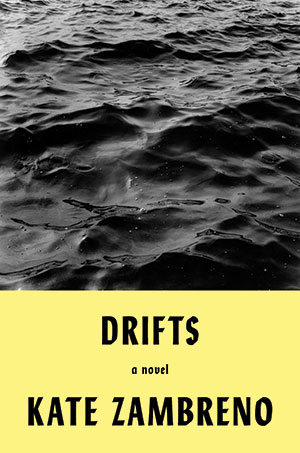 DRIFTS. An appropriate title for a book of mostly one-page stands? A noun perhaps, short for whatever washes up from the depths? No, Kate Zambreno is not scavenging, exactly. Nor is she a pilgrim of surfaces. It is a book that teases the reader. As with waves, ripples on an otherwise flat surface, snowdrifts, much is the same, a repetition of what’s seen, concerns, words day by day.

Is Drifts a novel? It is announced as such on the dust jacket but not the title page. It has length, chronology, a setting—New York City—one main character, the voice of a writer, interactions with her dog, various neighbors and their animals, feral cats, a significant other who may or may not be a husband. The narrator commutes to a part-time job teaching writing at an unnamed university, worries about writer’s block, gets pregnant, and worries about finances and whether she will be able to write much after the birth of her daughter.

It is arranged as a journal, broken into single pages, sometimes single paragraphs, for certain days. She reads, considers Dürer prints, thinks about a biography of Rilke, emails friends, quotes writers on writing. The entries are in chronology, selected days in different seasons. They are divided into “Sketches of Animals and Landscapes,” neighborhood encounters, anxieties of writing, “Vertigo,” pregnancy, the city, teaching, and writing.

I read the entries as if they were a journal, after realizing there is little narrative thrust. Each entry is separate, an island in a fragmented, self-absorbed life, occasionally longer sections on Rilke’s life, with its projects and anxieties. There is a density of images, mainly visual, together with the narrator’s feelings, thoughts about other writers, the latter often concluding the day’s entry.

Should Zambreno have called it Meditation? Her wish to create art that is like a trance, writing like a gaze, suits pages of thoughts and moods. The book projects a reader who can sustain attention while wrapped in an isolated self. Is Drifts fiction? The journal format, details of a writer’s life, a page of acknowledgments thanking some of the people who appeared as characters, and a number of photographs suggest it is not. Mentioned are black notebooks, a second journal, and yellow notebooks, the latter meant to contribute to the projected novel called Drifts. One gets the impression that this book is the author’s life. Like Kafka, she is “made of literature.”

Drifts undercuts notions of drama, empathetic projection, intellectual independence, and even confidence as necessary to the life of a writer. At its best, it contains passages of struggle plainly told, with disarming candor.