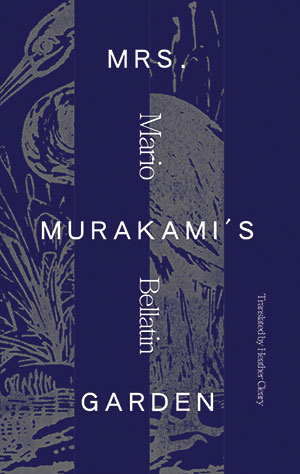 OVER THE PAST FOUR decades, the Peruvian Mexican writer Mario Bellatin has produced one of the weirdest and wildest contemporary literary oeuvres in the Spanish language (rivals to the crown might include César Aira and Enrique Vila-Matas). Fiercely cosmopolitan in outlook, his subjects range far beyond Latin America—without ever leaving the continent entirely—to eastern Europe, for instance in his rewriting of an unfinished novel by Joseph Roth (Jacob the Mutant), China (The Szechuan School of Human Pain), and across the world. Bellatin may be most comfortable in the realm of universal literature, but that isn’t to say that he is remotely respectful of it: displaying a fondness for the fragment and intensely visual snapshot, his books tend to pick away at or openly tear up the established rules of narrative with a cool but amused objectivity, often citing authors and styles in a manner that leaves one unsure whether he’s being admiring or mocking. Underneath all this lies a keen sensitivity to human suffering often represented in the form of absence, loss, and the ghosts they leave behind.

Mrs. Murakami’s Garden, first published in Spanish in 2000, is in many ways a very representative albeit slightly subdued example of Bellatin’s work. An homage veering on pastiche of great modern Japanese writers such as Junichiro Tanizaki (whose book on aesthetics, In Praise of Shadows, plays a minor but important role) or Fumiko Enchi—translator Heather Cleary does an excellent job of producing their slightly rarefied tone—the narrative tells the story of how a young, ambitious Japanese academic, Izu, became Mrs. Murakami, wife to a much older, wealthier man with a distinctly murky reputation. Their subsequent unhappy marriage culminates in the destruction of the garden given to Mrs. Murakami in their wedding contract.

However, as one might expect with Bellatin, the book is far from a simple linear narrative. The plot jumps back and forth in time, releasing key snippets of information that must subsequently be pieced together by the reader. For instance, right at the beginning we learn that Mr. Murakami hammered the final nail into the coffin of his wife’s esteem for him on his deathbed by asking to see her former servant’s breasts one last time, but it is a long while before we learn how they might possibly have been intimate in the past. This game of information given and withheld is foregrounded by the bizarre use of footnotes; readers might be a little affronted that the author felt it necessary to explain what words such as sushi or kimono mean, but it is important to contrast these slightly gauche entries with the number of obscure references that receive no explanation of any kind.

The contextual sleight of hand reflects the psychologies and motivations of the characters; although the reader knows precisely how everyone ended up, they are continually left guessing at how they came to be there. Izu’s first contact with Mr. Murakami, for instance, comes when she flatly rejects his advances and writes a damning critique of his art collection that ought to have severely embarrassed a man of his prominence. The evolution of her feelings, or calculations, takes place against the background of the postwar battle that raged in Japan between tradition and modernity, a clash of Eastern and Western values that could be both harmonious and traumatic. By the end of the book, it’s still not clear who, if anyone, came out on top.